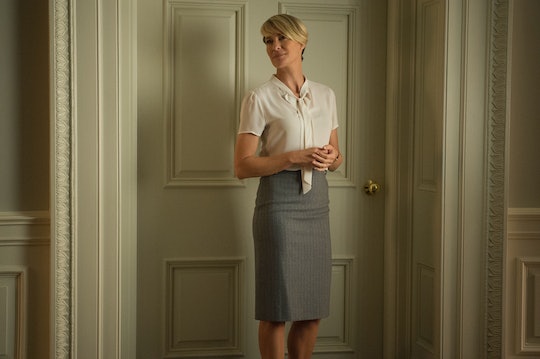 Among House of Cards' high-profile Season 4 guest appearances is the arrival of Ellen Burstyn as Claire Underwood's mother, Elizabeth Hale. We find her in her stately Texas home, the elegant, refined, purely Texas version of Claire Underwood's all-white power suit image. And just as soon as we meet Elizabeth Hale, we learn that things between mother and daughter are worse off than her current relationship with her husband. By why are they so bad? What is Claire Underwood's relationship with her mom, Elizabeth Hale? And why are things so tense? Well, for starters, we're greeted with the knowledge that neither Frank or Claire has visited Hale since her husband's (Claire's father) funeral. However, it doesn't seem like the passing of a beloved part of their family wasn't the only thing that sent these two in opposite directions. In fact, I got the hint pretty quit that their mother-daughter relationship has probably always been tense and tough.

This might explain why we've never heard about Clarie's mom up until this point. She isn't really mentioned in the show's first three seasons, which implied either an estranged relationship, or perhaps that Claire's parents were dead. Much of Claire's power comes from her ability to shut down her emotions and work with cold, steely efficiency toward her lofty ambitions. She's a stunningly high-achiever with the ability to leverage her personal sacrifice into plays for power with her husband. So it isn't difficult to imagine that Claire was raised by an emotionally distant, critical mother. (It also isn't surprising that Claire would leave that relationship right where she found it — at home — before she moved on to bigger, better, and, to her, more important, things.) How else would she be able to manage the crushing defeats of Frank constantly prioritizing his political ambitions above hers? She obviously knows a thing or two about how to recover from disappointment (likely, by not even giving herself the latitude to feel it). Though this is all purely speculation, it isn't hard to jump to that conclusion given just how thick the air between Hale and Underwood is the entire time their around — or even near — one another.

In the few days we see Claire staying with her mother, they spend most of their time avoiding each other. (Though Claire doesn't keep from spying on her mom while she easily kills and disposes of a mouse — so both her mom and her husband display a thing for killing animals? Shocker.) When they finally do butt heads, it's an icy, defensive exchange, with each one of them essentially failing to see how hard the other is trying to be civil. They both feel attacked and neither one seems emotionally aware enough to lower her guard.

We also learn that Elizabeth doesn't think very highly of Frank, with a decidedly un-presidential encounter between the two of them. She criticizes his "trailer park" upbringing ("It was a peach farm," Frank corrects), and it doesn't seem to matter to her that her son-in-law got her daughter to the White House. To Elizabeth, Frank is still a gutter rat, undeserving of her daughter in social stature.

The closest thing we get to a tender moment between Claire and her mother is when, after learning that Elizabeth has cancer, Claire visits her in her bedroom and begins to cry. Elizabeth finally embraces her daughter and reassures her that she's stronger than Frank. (ICYMI: The First Couple has been fighting since the end of last season.) She just needs to "put him in his place."

Basically, Claire's relationship with her mom seems like the foundation for her future self: cold, calculating, emotionally distant, but with a support and understanding from her husband (when they're getting along, that is) that was clearly lacking in her childhood. Will Claire continue to fall apart, bit by bit, in light of her mother's cancer diagnosis? Or will her Underwood fortitude serve her well? Time, and 11 more episodes, will tell.