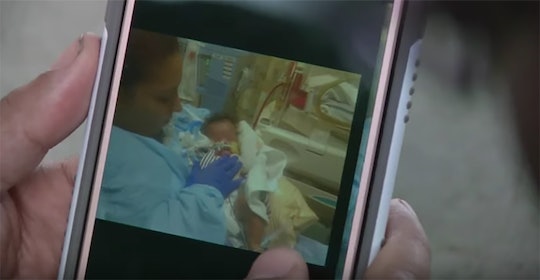 Doctors Are Working To Save This Baby Born Without Skin

In San Antonio, Texas on New Year’s Day, doctors delivered a baby boy born without skin. The little boy, named Ja’bari Gray, might have a rare condition called epidermolysis bullosa, as the San Antonio-Express News reported. And if you've never heard about this disorder before, there's a good chance you have questions about Ja'bari's symptoms and his future.

Priscilla Maldonado's third son, Ja'bari, was delivered by emergency c-section on Jan. 1 after his heart rate unexpectedly dropped, according to Maldonado's GoFundMe page. As if this development wasn't concerning enough, Maldonado and her husband, Marvin Gray, learned that their 3-pound baby who was born at 37-weeks was "missing a majority of his skin, aside from his head and legs," according to People. Ja'bari's condition came as a shock to Maldonado because her entire pregnancy had been healthy up until that point.

In addition to Ja'bari's skin issue, his eyes are fused together and his chin is fused to his chest. "An upcoming surgery will involve making an incision on Ja’bari’s throat, to cut scar tissue that has caused his chin to fuse with his chest," San Antonio-Express News noted.

At first, doctors at Methodist Hospital in San Antonio thought Ja'bari had a rare condition called aplasia cutis. The congenital condition causes the "absence of skin, with or without the absence of underlying structures such as bone," according to Genetic and Rare Diseases Information Center. "It most commonly affects the scalp, but any location of the body can be affected."

Doctors at Texas Children's Hospital in Houston, where Ja'bari was recently transferred, now believe the 3-month-old has a condition called epidermolysis bullosa.

"Epidermolysis bullosa is a group of genetic conditions that cause the skin to be very fragile and to blister easily," the U.S. National Library of Medicine states.

There are three major types of this genetic condition, one them which is "Autosomal recessive dystrophic epidermolysis bullosa." This form of the condition causes infants to be "born with widespread blistering and areas of missing skin, often caused by trauma during birth."

Furthermore, "blisters are present over the whole body and affect mucous membranes such as the moist lining of the mouth and digestive tract."

The final results, however, aren't in yet.

"It could be two to three weeks before they have an answer," Maldonado explained to San Antonio-Express News . "They don’t want to treat my son for the wrong thing."

If Ja'bari has this condition, its type will play a big role in his future.

"The outlook for children with epidermolysis bullosa (EB) depends very much on the disease type they inherited," Epidermolysis Bullosa News states. "Some forms are mild and even improve with age, while others are so severe that a child is unlikely to live into adulthood."

As for how Gray and Maldonado are affording Ja'bari's care, they're relying on help from GoFundMe and their employer in San Antonio, Taco Cabana, according to Boston.com.

Additionally, Medicaid paid for Ja'bari's transfer to Texas Children's Hospital, after initially denying the request because it was out of network.

Although this was a big help for the couple, it won't cover all of the "specialized medical equipment and other care" Ja'bari will need, as the San Antonio-Express News pointed out.

Hopefully, doctors at Texas Children's Hospital will be able to figure out what Ja'bari's rare condition is. In the meantime, the baby's parents will need all of the help they can get during this difficult period.

More Like This
Here’s What To Do If Your Baby’s Nose Bleeds After Suctioning
Can You Give A Sleeping Baby A Breathing Treatment? Experts Explain
Can You Burp A Baby Too Hard? A Pediatrician Shares Tips For Gassy Tummies
Is It Good For Babies To Be Exposed To Germs? It’s Complicated