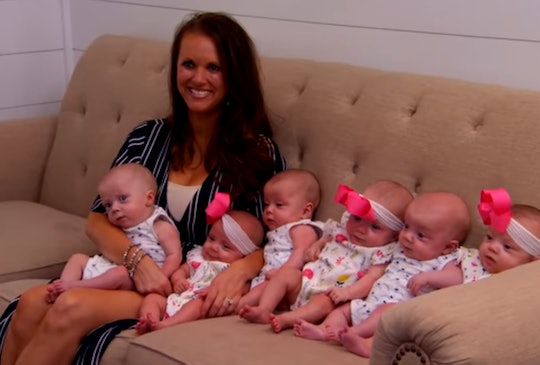 The super-sized family of Sweet Home Sextuplets took TLC by storm this year with a show that was funny, cute and full of the family’s southern charm. After watching them, it's understandable that fans want to know more about the sextuplets and Eric and Courtney Waldrop’s other children, 5-year-old twin boys as well as their 8-year-old son. But a search for their names comes up empty on social media, so what is Eric and Courtney Waldrop’s Instagram handle?

The couple went with a less conventional choice in setting up their social media. Rather than having personal accounts, they chose one combined one and named it for their show and their faith. The actual account handle is @Gods_Divine_Nine and the name that’s on the page is Sweet Home Sextuplets.

The Waldrops make no apologies for their strong Christian faith, as seen in their IG handle, which even factored into their decision to do the show at all, according to TODAY. “We didn’t go into this wanting to be — I don’t even like the word — celebrities,” Eric told the show. “We want to show the world what God has done for us, and how much we’ve been blessed by this situation. We want to show America how good God has been to us.”

That seems to be the mission of the family’s social media accounts — they can also be found on Facebook at God’s Divine Nine-Sweet Home Sextuplets — as they showcase their healthy, thriving, and adorable family.

That all six babies would make it to term was never a certainty for this high-risk pregnancy, according to Fox News. When Courtney was 13 weeks pregnant she told the outlet, “The risks are crazy. They are monitoring me closely, taking good care of me.” Eric added, according to Fox News, “We turned it over to God and we realized he was going to get us through it.”

Now the Waldrops are more than happy to share photos of all their children on their Instagram account. They regularly post pictures of the individual babies, but also include images of their three other boys and the whole family.

It seems as though the family opened the account as part of their promotion of the show and because the account is so new at this point, it’s still easy to go back and see the first images of the babies when they came home.

This one of the babies swaddled and sleeping sweetly particularly made me smile.

The family also promotes items that they’re using for the babies like this set of triple car seat strollers from Peg Perego. "Let’s go for a stroll!!! Love my car seats and strollers from #pegperego," the photo is captioned.

And of course milestones like the babies’ first Halloween costumes have to be celebrated. Look at this bevy of farm animals with their big brother farmers:

But those photos don’t come easy. Courtney commented in one episode that she loves taking pictures of her children, but with this many fussy babies... it can be a daunting task. A photographer who worked with the family on one of their early photo shoots told news station WHNT that they started planning things months early. But she said it’s all worth it to see the babies doing so well. “So much uncertainty and anxiousness,” she said, speaking of the pregnancy, according to WHNT. “So to see them in my arms and the babies perfectly healthy is just proof that God is good.”

The show just wrapped up Season 1 and Season 2 hasn’t been announced yet. But while fans of the series await renewal news, they’ll will be happy to be able to follow along with the Waldrops, and their antics and joys, on social media.