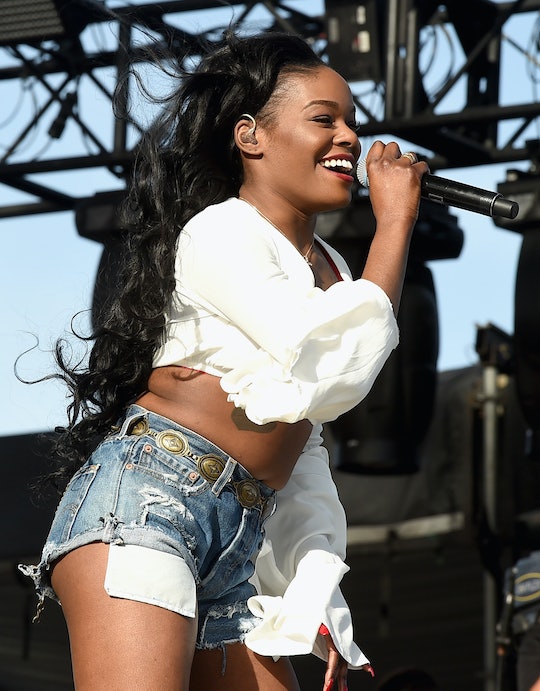 Whats Going On With Azealia Banks?

Instagram can be a great way for celebrities to connect to their fans — it gives a rare glimpse into some celebrities incredibly private lives. But sometimes people on Instagram — even celebrities — can get carried away and reveal a little too much information. After posting a very interesting Instagram Story last night people are dying to know — whats going on with Azealia Banks? The answer is not exactly the most direct one, but has something to do with feathers and a closet. Yes, it is as interesting as it sounds.

On Thursday night, Banks posted an Instagram Story to her account — which quickly got the attention of fans. In the story, which only lasts 24 hours, Banks is seen wearing safety goggles "the amount of crap that's about to come off my floor guys, oh my god," Banks says in the story. In the next part of her story, Banks shows the walls and floor of a room, covered in a black and white substance. "Three years worth of brujería," Banks says in the story. "I've got my sandblaster, my goggles, its about to go down." In the next video, Banks can be seen taking the sandblaster to the floor. It is not clear what is on the floor and walls in the video — according to People, a reported mix of feathers and a black substance cover the floors and the "walls are covered with what appears to be hardened stains of blood." But what exactly is going on in the video? For those who did not get to see the story, Twitter users saved the videos and uploaded them before Instagram deleted the story. Warning: the video is a little graphic and should be watched with caution.

Banks' representative did not return Romper's request for comment.

So what is brujería — the thing that Banks mentions she practiced in the room for three years? According to People, brujería means witchcraft in Spanish. According to New World Witchery, brujería focuses on a more practical type of magic — such as wishing for love or money — and "works with things like spirit summoning to achieve its aims."

It is unclear if Banks actually practices witchcraft of brujería — but this is not the first time she has mentioned witchcraft before. This past March, in an interview with Broadly, Banks shakes her head "yes" when asked if she practices witchcraft and magic, and claims "the egg spell" is her favorite spell:

You cleanse yourself with the egg. You pass the egg all over yourself, praying for all of your negativity to go away into the egg. You crack it in a crossroad and you walk away and you don't look back. That works. My mother practiced white table magic. Prayers to ancestors, prayers to saints, cleansing, and praying for protection.

After posting the story, Banks took to her Instagram where she posted these photos:

Until Banks gives a clear statement on what she was up to in the video, everything is just pure speculation. No one really knows what went on in the room where Banks shared a video of or what the substance on her floors and walls was. But whatever was going on, a lot of people felt strongly enough about it to talk about it. An interesting Instagram Story, indeed.