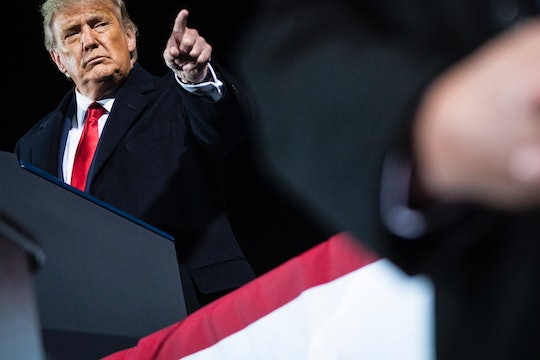 Hours after announcing he'd walked away from negotiations with Democrats over another COVID-19 stimulus bill, President Donald Trump called on Congress to immediately approve a series of economic relief packages in tweets that seemed to contradict his earlier statements. So, what exactly is going on with stimulus checks now? While Trump has said he's called off stimulus bill negotiations until after the election, he's since claimed he would sign what he called "a stand alone bill" authorizing $1,200 stimulus checks.

More Like This
The Obamas’ New Family Rule? Get Vaccinated If You Want To Hang Out With Us
Biden Proposes Plan To Give Every Child Free “High-Quality” Preschool
A Private School In Miami Says It Won't Employ Vaccinated Teachers
This First-Grader Convinced An Educational App To Add Black Hairstyles To Avatars

Stocks plunged Tuesday afternoon after Trump revealed over Twitter that he had ordered his representatives to end stimulus bill negotiations with Congressional Democrats until after he had been re-elected. "I have instructed my representatives to stop negotiating until after the election when, immediately after I win, we will pass a major Stimulus Bill that focuses on hardworking Americans and Small Business," Trump tweeted.

Yet hours later, after apparently learning that Federal Reserve Chairman Jerome Powell had called for additional economic support to be given to Americans earlier that day, Trump seemed to be once again in favor of pushing through a stimulus package as evidenced by his retweeting of a CNBC article quoting Powell's plea with the added comment of "True!"

Trump then moved to defend his decision to end stimulus negotiations in a tweet that claimed Speaker of the House Nancy Pelosi and other Democrats "playing 'games'" with stimulus payments. "They just wanted to take care of Democrat failed, high crime, Cities and States," the president tweeted. "They were never in it to help the workers, and they never will be!"

Across the aisle, Pelosi accused Trump of "putting himself first at the expense of the country, with the full complicity of the GOP Members of Congress" in a statement released by her office Tuesday. "Walking away from coronavirus talks demonstrates that President Trump is unwilling to crush the virus, as is required by the Heroes Act," Pelosi said. "He shows his contempt for science, his disdain for our heroes — in health care, first responders, sanitation, transportation, food workers, teachers, teachers, teachers and others — and he refuses to put money in workers' pockets, unless his name is printed on the check."

She went on to accuse the president of being "wedded" to a "$150 billion tax cut for the wealthiest people in America from the CARES Act" and "abandoning" children, the unemployed, and working families.

A few hours later, however, Trump was once again pushing for Congress to approve a series of stimulus bills. "The House & Senate should IMMEDIATELY Approve 25 Billion Dollars for Airline Payroll Support, & 135 Billion Dollars for Paycheck Protection Program for Small Business," Trump tweeted, adding both programs should be paid for with CARES Act funding. "I will sign now!"

In a follow-up tweet, Trump said he would also sign legislation authorizing a second round of stimulus checks. "If I am sent a Stand Alone Bill for Stimulus Checks ($1,200), they will go out to our great people IMMEDIATELY," he wrote. "I am ready to sign right now. Are you listening Nancy?"

Trump reiterated his willingness to authorize another round of stimulus checks early Wednesday morning, telling Pelosi in a tweet to "move fast, I Am Waiting To Sign."

But according to Washington Post reporter Jeff Stein, Trump's supposed willingness to sign off on stimulus checks hasn't resulted in renewed stimulus negotiations. "In case there was any confusion from Trump's tweets last night, White House Chief of Staff Mark Meadows today said: 'The stimulus negotiations are off,'" Stein reported via Twitter early Wednesday morning.