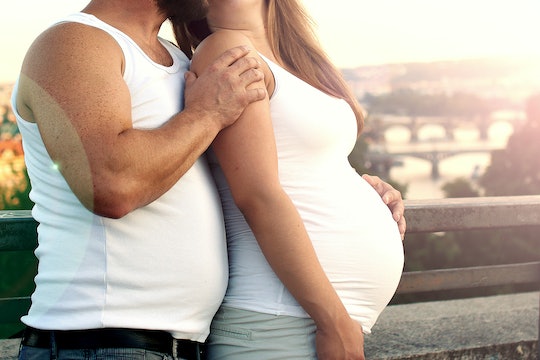 What's Happening In Your Uterus When You Have Pregnancy Sex?

Pregnancy sex is a hot topic (pun intended) among men and women who want to get it on during those nine plus months. During pregnancy some women experience dwindling sex drives, yet others report having really high libidos. No matter where you are on this sexual spectrum you might attempt to have sex at least once during pregnancy. The most popular question is always, "can the baby feel it?" Rest assured, the baby can't feel it. Not even a little. So what's happening in your uterus when you have pregnancy sex?

For starters let's briefly review what a uterus is. It's the pear shaped female internal reproductive organ, also called the womb, positioned in between the bladder and the anus, according to Britannica. The uterus is connected to the fallopian tubes and the cervix and houses the fertilized egg and baby until delivery time.

According to Health How Stuff Works, when a woman is sexually aroused, pregnant or not, the uterus becomes enlarged. Which is really crazy to think about considering how large it already is with a baby inside it. Thankfully the uterine muscles are extremely elastic and flexible. The same site also noted that the uterus lifts upward and maintains a larger size and tilt until an orgasm is reached or stimulation stops. When a penis is inserted inside a vagina, it doesn't go beyond the vagina which basically means the baby can't feel any 'poking' of a penis. Furthermore, the Baby Center website explained that the strong muscles of the uterus and the amniotic sac protect the baby.

When a woman orgasms, Web MD said the vaginal walls contract rhythmically every eight-tenths of a second. The intensity of these contractions depends largely on your individual and unique orgasm. The same site noted that the muscles of the uterus (the place that holds your baby) may also contract, but it's barely noticeable. Most of the contracting happens outside of the uterus.

The other popular question when people hear that the uterus can contract slightly during pregnancy sex is, will sex cause me to go into labor?

The Baby Center site stressed that in normal, low-risk pregnancies sex will not trigger labor. Again, an orgasm might cause very small uterine contractions but they're over very quickly and are generally harmless. Because of increased blood flow to your pelvis during arousal and orgasm, you might feel the baby move or kick after sex. This is only due to increased circulation and should not be alarming.

Even with all of this information you might still feel leery about having pregnancy sex, and that's OK. For some pregnant women, their worries and anxieties about the pregnancy are so overwhelming that it turns them off to sex completely. Other women may feel self-conscious about their pregnant bodies. As much as everyone wishes that pregnancy was this glowing, glamorous affair with no negative thoughts or feelings, that's just not reality for some women. The immense changes during pregnancy impact your entire being, and all aspects of your life including sex. Asking questions and being curious about the inner-workings of sex during pregnancy is totally normal, if not encouraged. That way, if you decide to have sex during your pregnancy you'll be able to do it when you're mentally comfortable (armed with all of this knowledge), emotionally relaxed and physically ready.