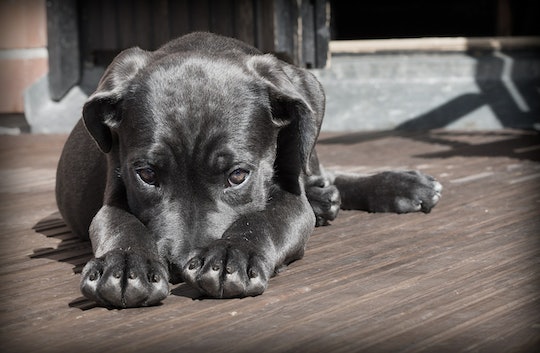 What's Happening To Pets Stranded In The Louisiana Flood? Heroes Have Come To The Rescue

As flood waters rose across Baton Rouge and the surrounding area, it wasn't just people who needed rescuing. Thousands of pets, from dogs and cats to horses, were rescued from Louisiana flood waters. What's happening to pets stranded in the Louisiana Flood? Some are still in shelters with their families and others have been evacuated to other areas to be adopted to new families.

The way pets are treated during a disaster is mandated by a law passed by Congress after Hurricane Katrina called the "Pets Evacuation and Transportation Standards," according to the Times-Picayune. The law mandates that rescuers make the same effort to save pets in an emergency as they would to save a person.

There have also been plenty of volunteers willing to pitch in. Jodie Summers is a volunteer running a Facebook page called "Local Crisis Info Louisiana 2016" dedicated to organizing rescue efforts for both people and pets, including livestock. She said, according to the Times-Picayune:

Many horses are being sheltered at the Lamar Dixon Expo Center, which has stalls and a rodeo, but Summer said they are completely full.

Someone from a place called "Bushy Creek Ranch" from Gloster, Mississippi, posted "We have hookups and pasture available for anyone needing assistance!" on the Facebook page to offer their help for stranded livestock. "Headed out now to help those in need!"

The luckiest pets from the flooded areas have been allowed to stay in shelters with their families.

Other victims of the floods are forced to visit their pets in homeless shelters.

The Humane Society and other animal shelters are overwhelmed and need help.

During the first hours of the flood, there were many heroic pet rescues, like this one by Fire and Rescue boats that saved a man and his dogs.

Here's a man who turned a mattress into a makeshift raft for these dogs.

Here's another moving image of a dog rescue.

The National Guard has also been involved in many pet rescues from the Louisiana flood.

And here is incredible footage of a woman and her dog being saved from a car being swept away by flood waters.

PETA, the animal rights organization, put out a call to folks in Virginia and North Carolina interested in adopting animals displaced by the Louisiana flood, including 35 dogs, 20 cats, six rabbits, and even a cockatiel.

Here's just one more amazing video of a dog rescue by a group that calls themselves the "Cajun Navy."

Though it's not the first thing you think of after a tragedy, animals often also need help after natural disasters. Volunteer efforts and donations can help to get them back home or into new, loving families.