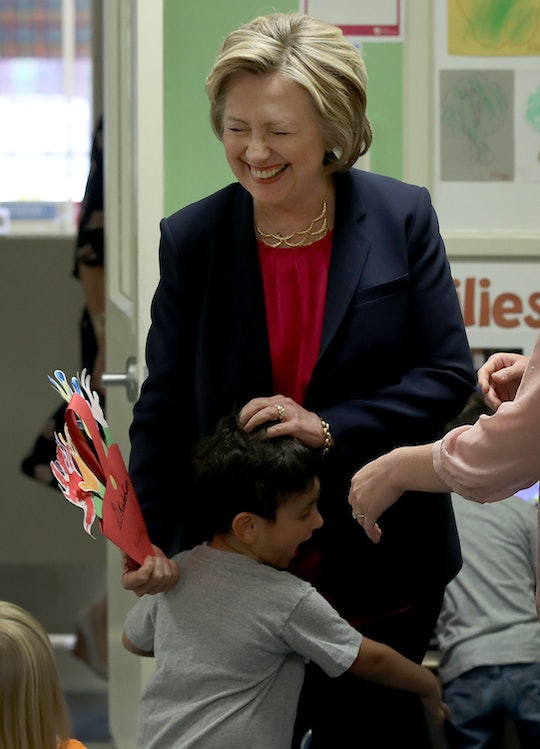 Working families buckling under the financial strain of securing affordable childcare heard an unprecedented promise from Democratic frontrunner and presumptive party nominee Hillary Clinton this week. Speaking to voters in Kentucky on Tuesday, the former Secretary of State vowed that if she becomes president, families would pay no more than 10 percent of their income on child care. If enacted, that would mean families could see substantial relief under Hillary Clinton’s child care plan since, according to the campaign’s website, many American households are now paying more than one-third of their income toward securing care for their children.

But while the prospect of capping skyrocketing childcare costs might appeal to many parents, it could be a while before details on Clinton’s child care proposal are available, according to the Washington Post. The campaign has so far offered only a high-level view of the initiative, saying that the benefit would include “a mix of federal subsidies or tax credits,” the Post reported.

Clinton made her appeal to working families during a campaign event in Louisville, Kentucky, according to the Post. In a series of posts issued on her official Twitter account during her speech, Clinton laid out why she planned to make tackling the out-sized cost of childcare a priority in her presidential platform:

Late last year, the Economic Policy Institute issued a report examining childcare costs in 10 metropolitan areas. Among the findings in that report was news that day care costs for an infant and a 4-year-old in those cities could claim anywhere from 20 to 30 percent of a family’s income.

But according to a Pew Research Center report on child care affordability, as startling as that average seems, it doesn’t reflect the uneven financial strain felt by low-income households. According to that report, two-earner families with income of $4,500 or more paid around 6.7 percent of their family income toward child care, while those with monthly incomes of less than $1,500 paid approximately 39.6 percent of their family income.

Clinton's child care proposal was one of several goals for supporting working parents, the candidate announced on Tuesday, according to a New York Times report on Clinton’s speech. She also spoke about increasing pay for child care workers and expanding home visiting programs for new and expectant mothers.

Her message to families comes at a critical time for Kentucky voters. The state will hold its Democratic primary on May 17, and so far Vermont Sen. Bernie Sanders has been polling as the favorite, the Post reported. But by focusing on the economic needs of middle- and working-class parents, Clinton’s argument seemed more about peeling off support for her Republican rival, Donald Trump, during the general election. According to the Times, Clinton spent much of her time in the speech taking aim at Trump’s claim that American wages were too high and his vow to repeal the Affordable Care Act and other economic supports.

“I think with somebody like Donald Trump, you would see a race to the bottom across our country, with working families paying the price,” Clinton said according the Times. “And I don’t think that’s a risk we can afford.”