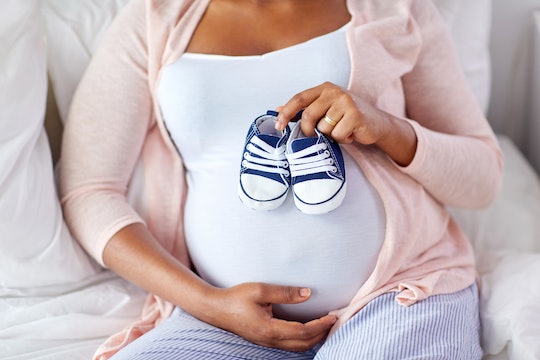 A California bill introduced in the state Senate is seeking to curb the increasing maternal mortality rate by making perinatal care more equitable for Black women. The proposed California Dignity in Pregnancy and Childbirth Act, Senate Bill 464, which is making its way through the Committee on Health aims to "reduce the effects of implicit bias in pregnancy, childbirth, and postnatal care so that all women are treated with dignity and respect by their health care providers."

Introduced by Sen. Holly Mitchell (D-Los Angeles) and coauthored by Assembly Member Dr. Shirley Weber (D-San Diego), the legislation was proposed in late February and is cosponsored by ACT for Women and Girls, Black Women for Wellness, Western Center on Law & Poverty, and NARAL Pro-Choice California, according to a fact sheet provided to Romper by Mitchell's office.

The bill would require all perinatal healthcare providers, including physicians, midwives, and nurses, to receive an implicit bias training with refresher courses every two years, or more frequently if determined to be necessary by the healthcare facility. The required trainings would be designed to limit the impact of implicit bias on maternal health by hosting important discussions on race, historical and contemporary oppression of minority communities, and health inequities that result in a higher mortality rate for Black women, according to the proposed legislation.

"At present, health care providers in California are not required to undergo any implicit bias testing or training," the bill reads. "Nor does there exist any system to track the number of incidents where implicit prejudice and implicit stereotypes have led to negative birth and maternal health outcomes."

The proposed legislation is looking to change that. Included in the bill is a requirement to track and publish data on maternal health and mortality rates broken down by county, facility, and racial and ethnic identity. It would track and publish data on health conditions that most commonly cause pregnancy-related deaths, including but not limited to hemorrhage, hypertension, sepsis, and others. The bill would also turn the requirement of death certificates to indicate if the decedent was pregnant at the time of or within the year prior to death to specify "whether the decedent was pregnant within 42 days of death or within 43 to 365 days of death," per the text of the legislation.

"Since black women are among the most vulnerable when it comes to giving birth in our state, we must focus our attention and resources toward making sure they are properly cared for before, during and after they give birth," Sen. Mitchell wrote in an op-ed about the legislation.

California’s Senate Bill 464 comes as the nation’s maternal mortality rates steadily rise. The United States has the worst maternal mortality rate in the developed world, per NPR. According to the Centers for Disease Control and Prevention (CDC), about 700 women die every year in the United States as a result of pregnancy or delivery complications. The World Health Organization puts that number closer to 1,200.

This phenomenon adversely affects Black women, along with Latina women born outside the United States. According to 2018 research published in Clinical Obstetrics and Gynecology, Black women are three to four times more likely to die in a pregnancy-related death than white women. The research shows that quality of health care “may be a critical lever for improving outcomes for racial and ethnic minority women.” In California, a report published by the California Pregnancy-Associated Mortality Review (CA-PAMR) showed that while Black women made up only 5 percent of the state’s birthing population, they accounted for more than a fifth of pregnancy-related deaths.

According to Mitchell's staff, factors that usually explain health disparities between communities such as socioeconomic status, access to prenatal care, education level, and general physical health do not seem to explain this phenomenon.

In fact, the staff tells Romper by email, Black women from middle and high income backgrounds have worse birthing outcomes than white women living in poverty. What's more, non-smoking Black mothers are shown to have worse outcomes when compared to white women who smoke a daily cigarette. "Evidence points to implicit bias as one of the causes for the wide disparities seen between Black women’s maternal mortality numbers and other ethnicity groups," Mitchell's staff says.

The staff points to a worrisome University of Virginia study to confirm its implicit bias theory, which found that white medical students believed racial myths, including Black people have less sensitive nerve endings, have thicker skin, are able to tolerate more pain, and age slower than white people.

"SB 464 will preserve lives so that childbirth remains a joyful moment for all mothers, and not a life-threatening event for Black and foreign-born Latina mothers," wrote Sen. Mitchell's Communications Director Ray Sotero in a fact sheet provided to Romper. SB 464 aims to do so "by preparing perinatal medical providers to better care for mothers in some of the most vulnerable moments in their lives."

The future of Sen. Mitchell and Assembly Member Weber's bill is still uncertain.

More Like This
Pitocin Induction: What It Is & The Play-By-Play
Can You Bowl While Pregnant? Experts Weigh In
OB-GYNs On How The End Of Roe Changes How They Can Care For Us
Considering Getting A Tattoo While Pregnant? Here’s What To Know