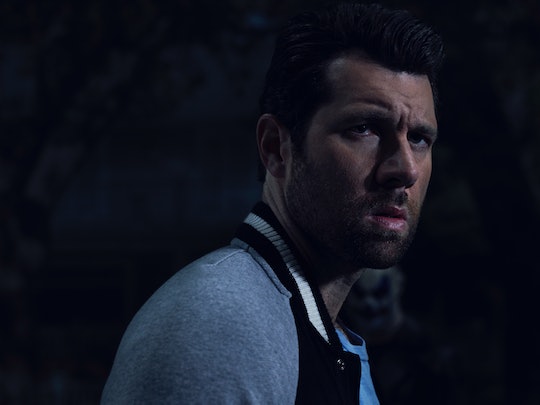 Ally's New Neighbors Are Hiding Something On 'AHS: Cult'

There were some new neighbors on the block in the second episode of American Horror Story: Cult. Harrison and Meadow Wilton moved into the house across the street from Ally and Ivy, which was recently made available by the murder of its former residents. Ally watched the movers unload all manner of strange things, but the weirdest of all were sealed barrels. Later on in the episode, Ally asked Ivy the question most viewers were also wondering: what's in the barrels on American Horror Story: Cult?

Ivy wasn't interested in the answer and the Wiltons weren't telling, so right now it's anyone's guess what was in the barrels. They looked like the kind of steel drums that toxic waste is stored in in superhero stories that the villain is seen carting around, but it's highly unlikely Harrison and Meadow were dealing in toxic waste. Though it wouldn't be too surprising if they were, because they had packed their new house with any number of unusual items: from Nicole Kidman memorabilia to an armory of guns to literal hives of bees, they had it all. The contents of the barrels haven't been revealed, but Harrison's career might give some indication of what could be in there.

Beekeepers do use barrels as part of their equipment. A quick Google search led to images of steel tanks and honey extractors that didn't look totally unlike what was being unloaded at the Wiltons' house. I'm no beekeeping expert (far from it), but it's feasible that the mysterious barrels were nothing more than something Harrison uses for work. Then again, this is American Horror Story; it can't be that simple.

The Wiltons are undeniably creepy. Throughout the episode their behavior seemed unnerving, too cheery and too forthcoming without actually revealing much of anything. The fact that they jumped at the chance to move into a murder house didn't bode well for them either. They definitely seem like they're hiding something, and the barrels could be the key. Perhaps they are keeping some kind of dangerous chemical in there for some unknown future purpose.

And there's an even more sinister possibility, too: there could be bodies hidden in the barrels. Real life murderers have used barrels to store evidence of their crimes to keep from being discovered, and there's a chance the Wiltons are doing the same. Viewers have very little info about them so far. All those guns, plus the fact that they didn't balk at the murders of the previous owners, could be evidence they have some incredibly dark secrets of their own.

Whatever the answer may be, it's clear the Wiltons are hiding something. And the answer just might be in those mysterious containers.