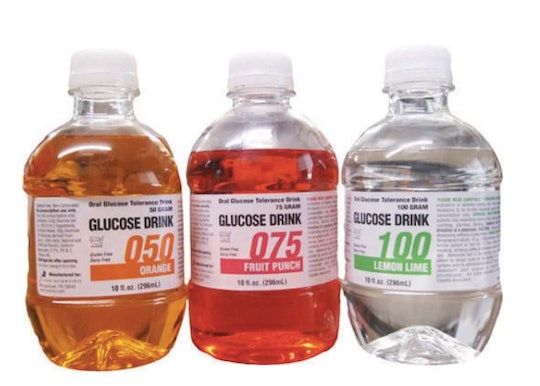 Here's What's Actually In That Glucose Drink You Have To Chug

I'll be the first to admit I hate the glucose test. For more reasons than just that absolutely nasty taste. It's a time consuming test, and because you have to take it fasting, it's miserable — especially if you suffer from morning sickness. Chugging that drink on an empty stomach is one of the more disgusting things you do at your OB-GYN's office, and that's saying something considering the fact you pee in a cup every time you're there. So, what's in the glucose drink that makes it so disgusting and also controversial? And why are more and more women declining the beverage?

While there are dozens of these drinks on the market, the pricey sugar beverages are essentially a mix of sugar and water, noted a popular supplier's website. In this case, it's a combination of about 75 grams of glucose with citric acid, water, some flavorings, and a minuscule amount of sodium benzoate and sodium hexametaphosphate as preservatives.

Why is it so controversial? Like anything, the internet has found itself in a frenzy because a blogger referred to the drink as toxic. She claimed that the use of the scary sounding brominated vegetable oil (BVO) that appears in some, but not all, of the glucose test drinks poses a particular risk to the mother and developing fetus. While there is likely some truth to the risk of brominated oils, not all of the drinks contain this chemical, and if they do, it is in minute amounts.

But, as the Mayo Clinic noted, it's generally considered safe in small amounts, but that doesn't mean women aren't worried about it. Why wouldn't they be? This concern has changed the products many doctors are choosing. I called several providers' offices in New York City to conduct a highly unofficial poll, and only one out of 13 offices used a drink that contained BVO, and they were in the process of transitioning to BVO-free beverages.

There's also another ingredient that caused some furor lately in the drinks, and that is sodium benzoate. It sounds awful, right? We're taught to only trust the ingredients we can identify, and that makes sense. But, it turns out, it's actually no big deal. Sodium benzoate is a salt that works as a preservative for the drink, because scarier than a tiny amount of preservative during pregnancy is food spoilage, noted Canadian Family Physician. Sodium benzoate is a naturally occurring substance that just so happens to help slow the degradation of the product. It's only recently gaining fame because food giant Panera Bread discussed its use in fireworks in a tweet, and claimed that because it has more than one use, it shouldn't be eaten. (And magnesium is used in explosives, so we better give up dark chocolate.)

We know this is a false equivalence, but when a huge corporation makes it, it suddenly becomes plausible. Thankfully, chemist Derick Lowe of Science Magazine disputed the risks of sodium benzoate, noting its benign properties and prevalence in many foods.

So if it's just sugar and flavoring, I have another question that seems even more pressing — especially if the ingredients are all so common and safe. What's in the glucose drink that makes it so expensive? A case of 24 bottles costs upwards of $200 depending on the manufacturer, and we know they're not spending that money making the texture or taste anything remotely considered pleasing. Why are they $8 or more per bottle?

Examining this problem seems wise especially considering that many doctors offices set aside two or three bottles per patient to make sure that they're fully covered for possible spillage or, for patients like me, loss from puking. What they found may shock you. As it turns out, there really isn't a quantifiable difference between the glucose drink and a $2 pack of strawberry twizzlers, which are delicious and fun to eat, according to Diabetes Care.

However, doctors trust what they know, so the drink remains the gold standard. That doesn't mean you can't bring it up to them, and probably bring the study as well.