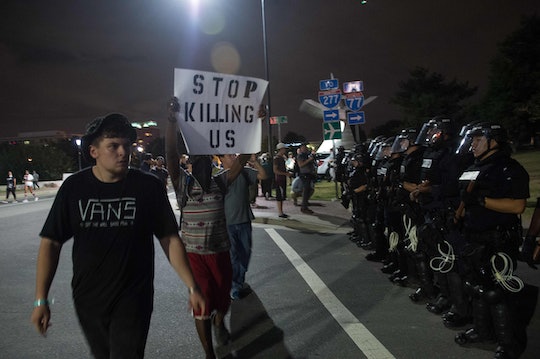 What’s In The Keith Lamont Scott Video? His Wife Filmed His Encounter With Police

What exactly happened when Keith Lamont Scott was killed by police in Charlotte, North Carolina, has been heavily debated by both law enforcement and the public this week. On Friday, the Scott family's attorney provided The New York Times with a video Scott's wife filmed during his encounter with the police. What's in the Keith Lamont Scott video, however, does not answer all of the questions the public has regarding the shooting.

The video, which was shot by Rakeyia Scott on a cell phone camera, doesn't show Keith's death, although viewers can hear gunshots being being fired outside the camera frame. Several people can be heard speaking: Rakeyia talks to both the police officers and her husband; a police officer yells at Keith to drop his gun; and Rakeyia tells the officer her husband is unarmed. Moments later, Rakeyia's video pans to Keith, who lays wounded on the sidewalk. It's a disturbing video to watch.

"Drop the gun!" an officer yells in the background.

An officer continues to yell at Keith to drop the gun. At this point in the video, Keith has not stepped out of the pick-up truck and is not visible. "Let me get a f—cking baton over here," an officer yells.

Gunshots are heard, Rakeyia's filming is disturbed, and then she can be heard yelling repeatedly, "Did you shoot him?" and "He better not be f—cking dead."

Keith was shot on Tuesday afternoon in his apartment complex parking lot, where he was reportedly waiting for his son's school bus to arrive. Officers were searching for a wanted man when they allegedly saw Keith emerge from his car with a gun. Soon after, Keith had been fatally shot by officer Brentley Vinson. Since then, police and the Scott family have debated what happened: Keith's relatives say he was unarmed and reading a book, while police claim he was armed and did not drop his weapon.

While Rakeyia's video doesn't answer the questions that have remained unanswered in the case of Keith's death, it paints a heartbreaking picture of what his family endured.