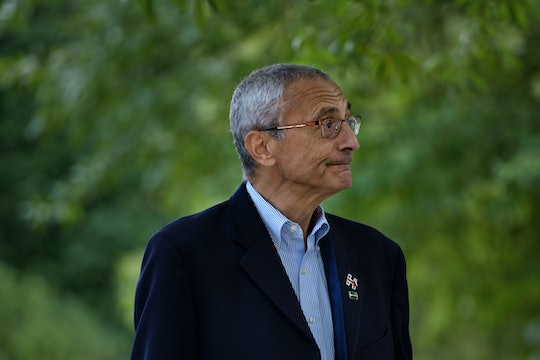 Well, the WikiLeaks emails keep coming. The organization has leaked tens of thousands of hacked emails allegedly from inside the Hillary Clinton campaign over the past few weeks, although the emails have been light on damning information. The latest batch of emails allegedly hacked from John Podesta, Clinton's campaign chair, reveals more of the same, which is to say not much of anything. (Unless you're scandalized that Podesta received a $6.50 reward from Sports Authority! Does this mean that Clinton is working to undermine Modell's?? Sad!)

According to RT, the latest Podesta emails also include some discussion of former Vice President Al Gore and his non-endorsement of Clinton (he has since endorsed her), as well as talk about how to present Clinton's use of a private server.

It seems fitting that Russian-based RT is one of the only major news outlets to have currently reported on the latest batch of emails, since many suspect Russia of being behind the hacks, and actively trying to influence the election.

In a statement to Romper on Monday, a Clinton spokesperson wrote,

In a brazen display of collusion, Russian state owned television continues to promote WikiLeaks' releases even before Assange can do it even after it's been proven beyond any reasonable doubt that the Russians are the source of the purported Podesta material. Given a third opportunity on the debate stage to admit and condemn the Kremlin's actions, Donald Trump refused to do it and instead continues to act as Putin's puppet despite being briefed by U.S. intelligence. It is bizarre and disqualifying that he continues to cheer on this attack on our democracy. It is time for Donald Trump to tell the American people what he knows and when he knew it.

Ultimately, though, despite the Clinton camp's worry, these Podesta emails simply reveal what it's like to run a large-scale presidential campaign, rather than any evidence of nefarious dealings. Podesta and the people with whom he corresponds discuss the sorts of issues that have probably cropped up in every other candidate's private campaign emails—how do you define your candidate's message? Is that other popular person going to run, and potentially torpedo your candidate's chances? How do you appeal to the most voters?

And sure, maybe they get snarky sometimes, but who doesn't in their private emails?

Besides, these emails aren't coming from Clinton herself, so it isn't necessarily fair to blame every little thing someone else might say directly on her. Not to mention that it's entirely possible that some of the WikiLeaks emails may have been doctored. As PolitiFact points out, when thousands of emails are released at once, it's easy for hackers to alter just a few, and have that be overlooked in the general information glut. (The Clinton campaign has not yet verified the accuracy of the emails, and has also not yet shown any of them to be falsified.)

So although these WikiLeaks emails may have been built up, there's not much to see in them.