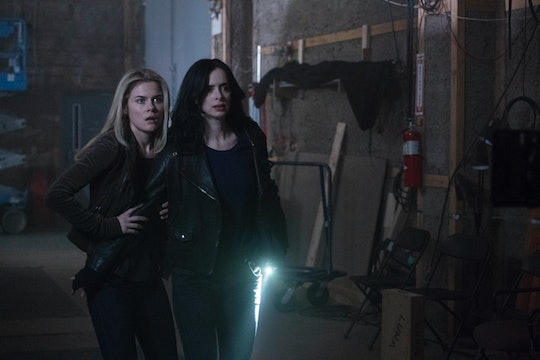 Warning: Season 2 spoilers ahead! In the second season of Jessica Jones, Trish Walker started heading down a dangerous path. Eager to engage in some heroics, Trish saw the opportunity to boost her natural abilities and she took it, in the form of an inhaler snagged from ex-boyfriend Will Simpson. But what's in Trish's inhaler on Jessica Jones? She didn't ask any questions before she used it, and the aftereffects really don't seem manageable.

Simpson did not look good when he made his return, to put it mildly. He was skulking around after Trish with bloodshot eyes, insisting that he was there to protect her. To do so, he was relying on some kind of drug dispensed through the inhaler. It increased his strength, but not to the same extent as the color-coded red, white, and blue pills that he took throughout the end of Season 1. They made him incredibly strong but also made him mentally unstable. He appeared to be somewhat more self-possessed when using the inhaler, but it also made him sick.

The same was true when Trish used it, though her mood was also altered. She was pushier and more forceful, quick to anger and without much self-control. Once the effects wore off, Trish was in dire straits.

Trish slept for over a day after her first time using the inhaler and when she woke up, she couldn't stop vomiting. Her eyes were red and irritated just like Simpson's had been. In the early half of the season, the show didn't outright state what Trish was using, but there are some easy assumption to make. Simpson had previously been using performance enhancing drugs from a company called IGH, which experimented on people to heal them and instead ended up giving them powers they couldn't always control.

The superpower-granting experiments took different forms. Jessica was subjected to them after the car accident that killed her parents, and whatever was done to her resulted in permanent abilities that she was able to utilize with some practice. The effects of Simpson's pills (and subsequently his inhaler) were temporary and unpredictable.

Viewers don't get a hint about what the drug might be until Episode 10, when Trish gets a technician to take a look at it. After several tests, Trish is told that they "couldn't identify all its components, including an organic plant-based element" and that meant they couldn't replicate it for her. Then the technician says that "the few chemicals we could ID contain toxins too dangerous for any human being to ingest."

Unfortunately, that isn't revealing so much as it is incredibly worrying. Trish might depend on the drug to give her strength, but its poisonous qualities are also causing her tons of damage. The aftereffects of those toxins are serious, and not just because they contributed to all that puking. Over the course of the season, Trish was acting less like herself and more out of control, and that could be blamed on the inhaler.

Simpson was hauled off by IGH and his old acquaintance Dr. Kozlov at the end of Season 1, so it seems fair to guess that the inhaler was given to him by the organization. If that's the case, then the pills and the inhaler are likely connected even if they aren't the exact same thing. Either way, the effects are similar, though the inhaler looked way less drastic.

The mystery of what IGH is up to has been the main storyline of Season 2, and it seems to be the one thread that connects all the various character arcs. Trish's reliance on the unknown substance in the inhaler definitely leads back to IGH, even if understanding how is uncertain at first.