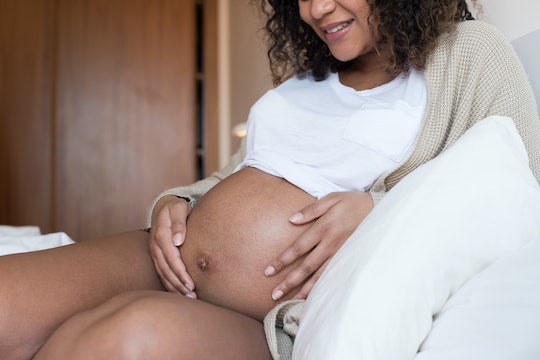 Here's Why You Still Have A Baby Bump Postpartum

In an ideal world, a woman's stomach would return to its pre-pregnancy form after giving birth. And not for appearance purposes; just so mom would have one less change to deal with. Unfortunately, what remains in your belly after you give birth can prevent that from happening for several weeks, even months.

I didn't think I'd automatically have a flat tummy after giving birth to my first child. But I also didn't think I would have what looked like a baby bump. I mean, I just gave birth to an 8-pound baby plus the afterbirth. I thought I'd at least feel more comfort in my abdominal area, even if it didn't immediately But it turns out, my experience was like that of most postpartum women.

In an interview with Cosmopolitan, OB-GYN Dr. Marjorie Greenfield said, in general, moms will look around six months pregnant for a couple weeks after delivery. Greenfield further explained that, at the time, the stomach muscles are stretched out, which contributes to the bump-like appearance. Your uterus is also the size of a cantaloupe postpartum, which explains why your stomach may appear larger and even feel a little bloated.

Additionally, your uterus still has to make it's way back into the pelvis after birth, according to What To Expect. If you've given birth before, you may remember some cramping (or contraction-like) pain afterward around the belly. This is because the cantaloupe-size uterus that's made a home in your stomach is shrinking from roughly two pounds to two ounces while heading into the pelvis, according to the aforementioned What To Expect article.

Immediately following birth, you'll also lose some blood, fluids, and amniotic fluid, which is some of the excess liquid contributing to your belly pooch, according to Fit Pregnancy. So you can consider all of that a and a contribution to what's inside your belly for a short time postpartum.

So no, there's nothing in your stomach after giving birth. But there is a lot going on beneath the surface that can contribute to the bump-like appearance. Although it may be frustrating, these things that are totally normal and will fade away as your recover.