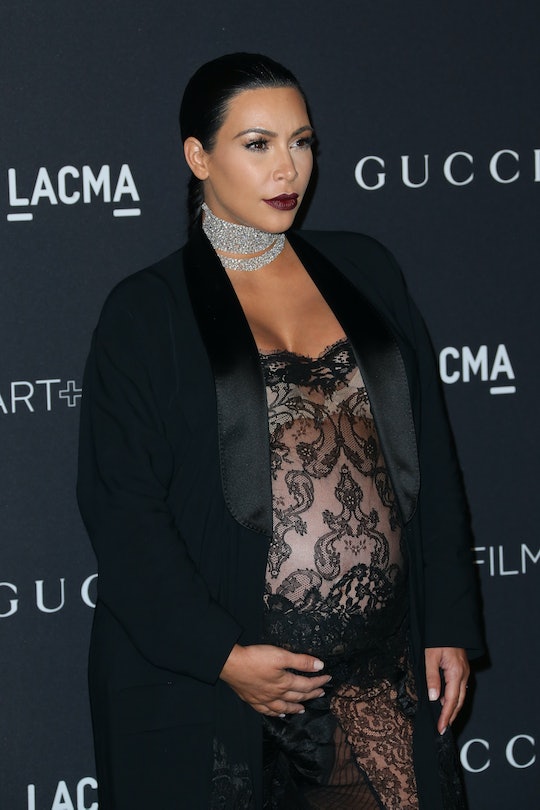 Well, North finally has a new playmate as Kim Kardashian gave birth to a her second baby. Though we were aware of her due date for some time, her baby boy came early — he was supposed to be a Christmas gift for the family (and the media, of course). And not only do we know that she and Kanye will be great parents (I mean, look how happy little North is!), we can't wait to see where and how the little one will make his debut. But the thing most people are waiting to find out? What's Kardashian's son's name?

So far, we must wait a little bit longer to find out. Though "North West" caused some to scratch a few heads, others figured Kardashian and West's son would be named Easton, as some reports indicated. But one thing we do know? Don't worry, the baby won't be named South. The couple has already told us we shouldn't expect the obvious choice.

Either way, it's great to see that, as Kardashian's website says, “Mother and son are doing well." There were several noteworthy differences between her first and second pregnancies. While it certainly wasn't her unique maternity wear (that we all envied), Kardashian was way more vocal about the struggles of pregnancy. While we hear about that glow and the love of expecting from many celebs, in November Kardashian said that getting pregnant was difficult this time around. She also told People that “some people find it blissful, they feel sexy, they feel alive...I feel completely the opposite!” Kardashian wasn't finished there, though:

I totally respect the struggle people have to go through. But that doesn’t mean I have to lie and say that it’s blissful. I find it to be a miserable experience.

One factor that may have taken away from the glamour was that Kardashian was reportedly considered a high-risk pregnancy. The 35-year-old admitted to E! Online she felt "anxious" while carrying her son, but has "access to amazing doctors that have been so helpful" so she is "hopeful that everything will work out and be fine." She also told E!:

I think that I'm really hopeful and you know I manage it really well, but when I write blog posts and stuff like that about how I think it's just such a miserable experience...I mean that's my experience and I'm not gonna pretend that it's not…My huge swollen feet I don't find fun and attractive. And I get I'm so blessed to be carrying a child again when I didn't think that was possible for me.

So, if you're just like me, you are patiently... anxiously refreshing Twitter and Instagram to get the first glimpse of Kardashian's son. But rest assured we'll see him soon enough... and he will be adorable. And won't be named South.