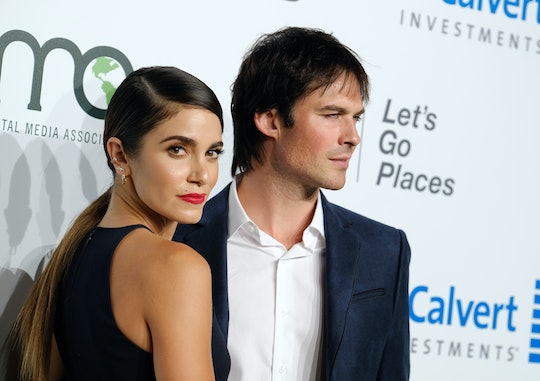 Nikki Reed and Ian Somerhalder might give a new definition to parenting and couple goals. In the weeks since they announced the birth of their daughter, the two have expressed the love for each other and their child in the sweetest ways. With so much goodness going for them in their lives, inquisitive minds definitely want to know — what's Nikki Reed and Ian Somerhalder's net worth nowadays? The two definitely keep their hands full in Hollywood and have nothing to worry about when it comes to their bank accounts.

Reed, on the other hand, is most known for her role as Rosalie Hale in the Twilight film series, which was a major success. According to E! News, Twilight made over $392 million worldwide with the film's actors receiving quite a lot of money in retroactive bonuses and residuals. According to Entertainment Weekly, Reed made a reported salary range of $750,00 to $1 million for the last two films in the five-part film series. Not too shabby.

But with their respective series behind them, Somerhalder and Reed have a lot to keep them occupied (when they're not fawning over their new daughter). Somerhalder is the star of the upcoming film, Time Framed, and just last year he signed a pod deal with WBTV along with Reed, according to The Hollywood Reporter. This means the two are helping develop and produce new projects and ideas for the people behind The Vampire Diaries.

Together, Somerhalder and Reed also have their own production company, Rare Bird Productions.

But this couple isn't just about acting or producing. Reed recently launched her own sustainable fashion line called Bayou with Love that she started while she was pregnant with her daughter, according to Fit Pregnancy. "I'm building and launching a line that's been a dream of mine," Reed told the magazine. "I honestly feel better than ever."

Regardless of how much money they have in the bank, it is clear that Reed, Somerhalder, and their new baby girl are doing just fine and are clearly busier and happier than ever.