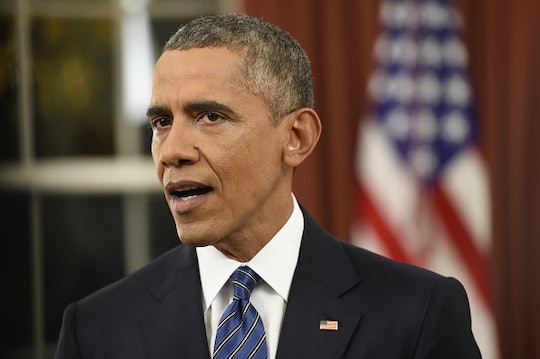 What's Obama's Plan For Fighting ISIS? 10 Things From His Oval Office Address You Need To Know

On Sunday evening, President Barack Obama gave an Oval Office address, tackling the threat of terrorism and what the United States will be doing to combat ISIS in coming months. The speech came only four days after the San Bernardino attack that killed 14 people, and less than a month after the Paris attacks that killed 130 and injured countless more. Both attacks have been connected to ISIS — in the case of the San Bernardino attack, one of the two shooters, Tashfeen Malik, reportedly posted a Facebook post praising the terrorist group. The second shooter in the attack, Syed Farook, was apparently a supporter of the Islamic State, according to his father. In the November 13 Paris attacks, French President Hollande said the terrorist attack was the work of ISIS, and ISIS took credit for the havoc caused.

With ISIS attacks taking place around the world — in 2015, they have been directly linked to attacks in 12 countries, and over 1,000 civilian deaths outside of Syria and Iraq — they have inspired fear globally. Taking the recent escalation in threat very seriously and recognizing the fear that has spread through much of the United States, Obama gave the nation several important points to think on as the U.S. moves forward in fighting the terrorist group.

The first part of Obama's plan includes working with over 65 allies to find terrorist plotters overseas. "In Iraq and Syria, airstrikes are taking out ISIL leaders, heavy weapons, oil tankers, infrastructure," Obama said. "And since the attacks in Paris, our closest allies, including France, Germany, and the United Kingdom, have ramped up their contributions to our military campaign, which will help us accelerate our effort to destroy ISIL."

2. Work With Iraqi and Syrian Forces

Rather than having American forces on the ground, the American military will provide Iraqi and Syrian forces with equipment and training to tackle ISIS. Obama noted that, "we're deploying special operations forces who can accelerate that offensive," in both nations, adding that investments in this area have increased since the Paris attacks.

Since the Paris attacks on November 13, allies against ISIS have increased the amount of intelligence shared among one another, and the group is working to shut down plots, prevent recruitment of fighters, and cut off ISIS' financing. On America's part, Obama said this means "working with Turkey to seal its border with Syria" and "cooperating with Muslim majority countries and with our Muslim communities here at home."

The United States has joined other countries in putting an end to the civil war in Syria, as ISIS thrives by working in a warring country. Pursuing cease-fires and resolution will allow the local and international community to focus solely on ISIS. This according to Obama, will allow, "the Syrian people and every country — including our allies but also countries like Russia — to focus on the common goal of destroying ISIL, a group that threatens us all."

In his speech, Obama noted that Congress should make sure no one on a no-fly list is able to get a gun, saying "what could possibly be the argument for allowing a terrorist suspect to buy a semi-automatic weapon?"

To decrease the number of mass shooting and terrorist attacks on domestic soil, Obama said we need to make it harder for people to get their hands on powerful assault firearms. "The fact is that our intelligence or law enforcement agencies — no matter how effective they are — cannot identify every would-be mass shooter, whether that individual is motivated by ISIL or some other hateful ideology," he said. The next logical step, then, is to remove their easy access to weapons.

Those who enter the United States without visas should be screened more heavily — specifically, the U.S. needs to be looking at whether they have traveled to established war zones.

While Obama doesn't want to put boots on the floor in Syria, he does want Congress to vote for a continued military force against ISIL. "For over a year, I have ordered our military to take thousands of airstrikes against ISIL targets," Obama said. "I think it's time for Congress to vote to demonstrate that the American people are united and committed to this fight."

9. Refuse to Turn Against Each Another

Obama argued that we can't let fear turn us against one another or believe that prejudice offers an answer. "We cannot turn against one another by letting this fight be defined as a war between America and Islam," Obama said. "ISIL does not speak for Islam. They are thugs and killers, part of a cult of death. And they account for a tiny fraction of a more than a billion Muslims around the world, including millions of patriotic Muslim Americans who reject their hateful ideology." It's particularly relevant, considering the anti-Muslim sentiment that has taken root in some governors and around the world following the Paris attacks — much like the prejudice that took hold after 9/11.

Obama ended his message with hope and a feeling of resilience, saying that, "we will succeed in this mission because we are on the right side of history," he said. "Let's never forget that freedom is more powerful than fear." With the concrete steps Obama laid out and his powerful words on the importance of unity, we can only hope people listen.