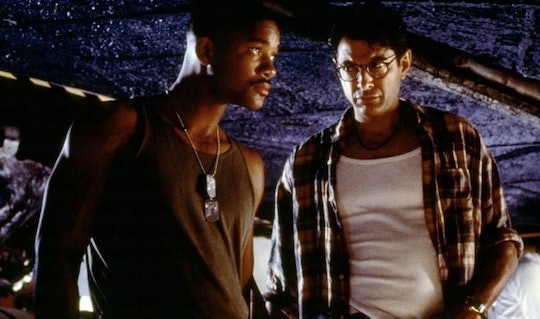 There's Plenty To Watch On TV THis Fourth Of July

The Fourth of July is my favorite day of the summer. It's a day for putting on every ridiculously star-spangled item of clothing you have and firing up the grill. A day for stuffing yourself with potato salad, corn on the cob, and those red, white, and blue firecracker Popsicles you devoured as a kid. And if you’re wondering what’s playing on TV this Fourth of July? I’ve got you covered. Get ready for a day full of your favorite programming that’s so America it bleeds red, white and blue.

Whether you're going to be walking in your local parade or taking in the Macy's Fireworks Spectacular in New York, there's always fun things to do —my personal favorite has always been my neighborhood carnival’s egg toss. Maybe you're gearing up for a full day of shenanigans outside in the sun. Or maybe what celebration means to you is vegging out in front of the TV to watch all the great movies and shows that are going to be playing in honor of Independence Day. And you know what? That’s your right as an American. That’s what our Founding Fathers fought for: the freedom to do whatever we damn well please with our time off. So if that’s your plan, here’s what’s on:

What's a more perfect movie to watch on this day than Independence Day? And what better way to watch it than on a constant, 24-hour loop? Starting at 6 a.m. ET and going until 6 a.m. ET the next day, E! will be playing Independence Day non-stop. Let's be real — you could probably have a great time just watching this movie over and over again.

Plan to wake up early this Fourth if you don't want to miss the start of FX's all-day superhero movie marathon, beginning with Green Lantern at 7 a.m. ET. The Amazing Spider-man and Captain America: The First Avenger will also be playing.

Forrest Gump has got to be one of the best movies to watch for the Fourth, with Tom Hanks' lovable Forrest Gump wandering through the biggest moments in recent American history. If you're going to be busy during the day or night, never fear. Spike will be playing the great movie twice: first at 12:30 p.m. ET, then again at 8 p.m. ET.

Another Tom Hanks movie, you ask? To which Spike responds, can you ever have too much Tom Hanks? No, no you cannot. Saving Private Ryan will be playing on Spike starting at 4 p.m. ET.

What's more America than Rocky Balboa in stars-and-stripes shorts punching Ivan Drago in the face? Absolutely nothing, which makes it perfect for this day. Sundance will be marathoning the first four Rocky movies, starting at 6 a.m. ET and then again at 3:30 p.m. ET.

This GIF alone pretty much says it all. The always-hilarious Bad Moms is showing at 3:15 p.m. ET on Showtime's Fourth of July lineup.

In times of trouble, Nicolas Cage is there to protect us and our historic documents. What better way to celebrate the signing of the Declaration of Independence than by watching Benjamin Gates steal it to keep it safe? It's basically your patriotic duty as an American. Tune in at 5:45 p.m. ET on Cinemax.

Everyone's got Fourth of July traditions, and for Syfy it's their annual all-day marathon of The Twilight Zone. From 6 a.m. all the way through to midnight, Syfy will be playing some of the greatest, creepiest stories put to the screen.

This is what we really all tune in for on the Fourth — the most spectacular of all spectaculars. Since most of the U.S. won't be in New York City for the big day, NBC is doing its annual live broadcast of Macy's Fireworks Spectacular so that no one has to miss out on the grandest, most lavish fireworks show in the country. It will be airing live at 8 p.m. ET and then rerunning at 10 p.m. ET.

No matter what you're doing — or watching — this Fourth of July, it's sure to be a fantastic day!