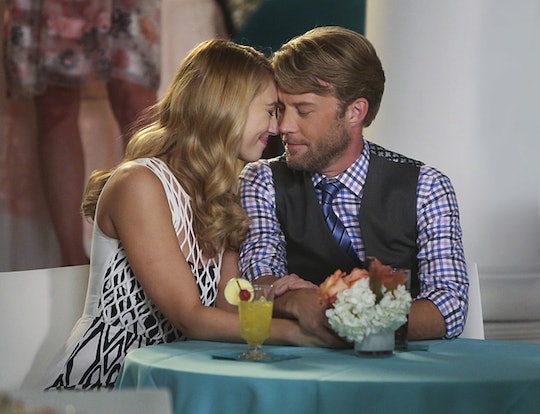 Scott Is Up To Something On 'Jane The Virgin'

Ever since Rafael discovered he's not a Solano and isn't included in the addendum to his father's will, he's only had more problems. And now that the addendum is in Scott's hands, I have to wonder, what's Scott's plan on Jane the Virgin? At the start of Monday's episode it was revealed that Anezka wasn't actually gone like Petra thought she was. In fact the evil twin was actually with Scott the whole time and Scott was determined to find some leverage on Petra so they could finally live happily ever after. Truthfully I kind of forgot about this plot point until the end of the episode. Instead I was focused on Petra, who had some plans of her own. Enlisting Catalina's help, she got Rafael out of the Marbella for the night so she could take the addendum to his father's will, which states that only his biological children are entitled to an inheritance, which would leave Rafael with nothing.

However, Catalina, who suddenly realized she had real feelings for Rafael, told him about the plan. Rafael confronted Petra and she finally broke down, admitting that she didn't want the addendum to be probated because she wanted to help her daughters and she feels she can only do that with the money Rafael has. Therefore she destroyed it so no one could ever find out the truth and Rafael could keep his inheritance. But, of course nothing is ever that easy.

At the end of the episode, Scott and Anezka popped back up and apparently they got hitched. (Uh, congrats?) More than that, Scott's wedding gift to Anezka was the taped up addendum that Petra thought she had destroyed, which is apparently their ticket to freedom. My guess is Scott plans on blackmailing Petra with said addendum. She's already made it clear she doesn't want it to see the light of day and there's no doubt she'll do whatever Scott's wants to make sure it disappears for good. However, what does Scott really getting out of this?

He claims he just wants his relationship (now marriage) with Anezka to be out in the open, but he could just do that without blackmailing Petra in the process. He and Anezka are married now, which gives her American citizenship and it's a little late for Petra to try and press charges. So does Scott really want money out of all this? Shares in the Marbella? Petra to leave? At this point it could be anything, but one thing is for sure — according to the narrator, whatever Scott's planning is going to trigger a catalyst of events and by the way the narrator said, "Poor Scott," it probably won't work out in his favor. Looks like karma's going to get Scott, maybe before he even gets Petra.