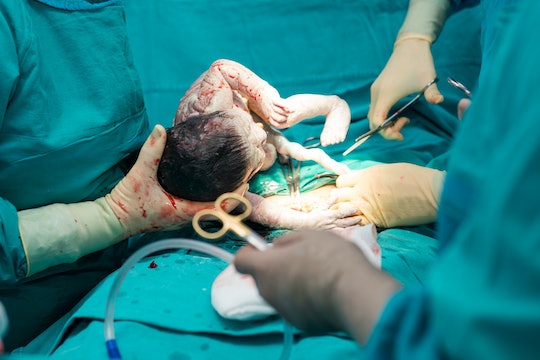 Whether a mom has medical conditions, her baby is stubbornly breeched, or there's an emergency situation that calls for the procedure, a C-section might not always be the first choice, but it saves lives. And now the procedure itself is changing. Usually, a curtain separates a mom from the baby's birth, and mom is more of a conduit than an active participant in the arrival of her child. But now there's something called a gentle C-section. So, what's the difference between a gentle C-section and a standard C-section? Turns out, the small differences can make a gigantic impact.

The major difference, according to The Bump, is how much more emphasis there is on keeping the mother engaged in the process. For example, instead of keeping that thick, sterile curtain up as a partition between the mother and the surgical procedure, gentle C-sections provide alternatives that can make the mom a more active participant in the birth of her child. During some gentle C-sections, a transparent curtain is used so the mom can see exactly what is being don and when. During other gentle C-sections, the curtain is adjusted so the mother can see what's actually happening when the baby emerges from the womb, or is removed entirely.

Gentle C-sections also eliminate the need to separate the mother from the newborn immediately after they're born. Instead of rushing to clean the baby up, nurses help recreate the vaginal birth experience experience by placing the baby on mom's chest to breastfeed, if she wishes, as soon as the baby leaves the womb. Then the health care team assesses the baby's health while he or she is being held by mom, and while mom is being stitched up by the surgeon.

According to the Center for Disease Control and Prevention (CDC), one out of every three births is done via C-section. The practice of gentle, or so-called natural, C-sections was first studied in the UK. According to one such study published in BJOG, An International Journal of Obstetrics & Gynecology, gentle C-sections provided a better overall experience and improved breastfeeding rates, with no medical differences between the two operations. In other words, incorporating the parents in the event, even if it's surgical, is a positive thing. This type of delivery is also referred to as "mother-centered," or "family-centered."

With all the benefits, why aren't all doctors performing Cesareans this way? For one, this technique is a relatively new one, only established in the last 10 years. Dr. Jeff Livingston, an OB/GYN in Irving, Texas, tells Parents that "most doctors aren't aware of it as an option, but it doesn't really require doing things any differently; it just requires a different coordination of care." He stresses the importance of advocating for yourself, or on behalf of the mother delivering, if this is the experience you want to have when a C-section is either an inevitability or a high possibility.

Of course, doctors also urge caution when approaching the subject of what you think a gentle C-section might entail, and even what the word "gentle" actually mean within this context. Dr. David Garfinkel, M.D., attending physician at Morristown Medical Center, tells Fit Pregnancy, "To be very clear, a gentle C-section is still surgery," adding that, "As a physician, I am not being more gentle as I do the surgery." Dr. Garfinkel goes on to explain it's more a shift in attitude than a change in procedure, per se, allowing the baby to stay with the mother longer than what was originally allowed during "traditional" C-sections.

And of course, the benefits of gentle C-sections are in no way meant to persuade physicians into performing more of them, or to convince patients that a gentle C-section is the only "right way" to give birth surgically. Of course, this procedure isn't recommended for emergency C-sections, and preterm births, babies at risk for low Apgar scores. But because of the very personal experience, if a C-section is in your future, it might be worth discussing with your doctor in the early prenatal stages. Your doctor should be familiar, comfortable, and interested in the feasibility of what will take place of the normal C-section practices to ensure your comfort and safety.