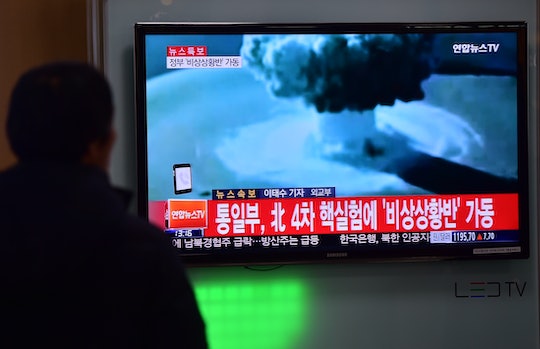 What's The Difference Between A Hydrogen Bomb & A Nuclear Bomb? What You Need To Know About North Korea's Test

North Korean leader Kim Jong-un said Wednesday his country has successfully conducted a hydrogen bomb test, possibly signifying a worrisome increase in the country's nuclear abilities. But what is the difference between hydrogen bombs and nuclear bombs? Nuclear weapons are incredibly destructive in general, and, as USA Today reported, the world already saw the damage an atomic bomb could do during World War II, when the United States dropped bombs on Hiroshima and Nagasaki. But according to the Washington Post, atomic bombs pale in comparison to hydrogen bombs: in a previous hydrogen bomb test carried out by the U.S. in 1954, the explosion was more then 1,000 times as powerful as the one in Hiroshima.

The difference lies in the way the explosion is made, according to The Guardian. Atomic bombs rely on nuclear fission — the splitting of atoms — to produce an explosion. A hydrogen bomb (which is technically called a thermonuclear bomb), relies on a two-part process that begins with a fission reaction similar to that of an atomic bomb, but then becomes a fusion reaction when the isotopes created by the first reaction join together, resulting in a massive (and incredibly devastating) explosion (it is fusion, for example, that creates the energy that powers the sun).

But despite this apocalyptic description, experts are skeptical that North Korea is capable of this technology at this point. Jong-un indicated via an announcement on state-run television that the bomb was a "miniaturized hydrogen bomb," according to ABC News, and reports said that the earthquake-like event that occurred following the test was much too small to be caused by a true hydrogen bomb. But, according to The Guardian, the smaller scale of the bomb could indicate that North Korea has developed something that could be realistically attached to a missile.

While it will still likely take time to confirm whether North Korea's claims are accurate, it is clear that it wants to be taken seriously as a global nuclear threat. Increased nuclear capabilities by North Korea mean that the rest of the world needs to be that much more concerned about the condemned state and their actions, as the implications could be tremendous.