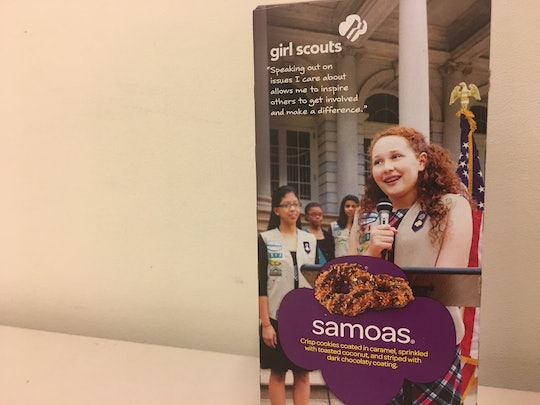 The Difference Between Caramel DeLites & Samoas

That addictive, sugar-high that comes once a year is here (thanks, Girl Scouts), and there aren't many things that draw you into the kitchen like a box of Girl Scout cookies does. What's more baffling is that once you open a box, it's probably not going to last past one sitting. Maybe because you can only enjoy them for a limited time, or maybe they're just that good, but either way, I'm not complaining. And I doubt you are either. However, an issue needs to be addressed that's currently a hot debate: What's the difference between Caramel deLites and Samoas?

There are quite a few theories floating around as to whether it's just a Girl Scout rebrand, a different name based on location, or possibly even the Mandala Effect. Many Girl Scout cookie enthusiasts don't even realize there are two cookies that are so similar until they stumble upon someone else calling their beloved cookie by another name. And once you come to that realization, it's very likely you may find yourself feeling confused, or even betrayed. Is this just an incident of "soda" versus "pop," or is there really a whole other cookie you didn't realize existed? And furthermore, what exactly is the difference (aside from name), because they look identical . . .

The answer is: yes, there is a difference, and no, it's not related to rebrand, location, or the Mandala Effect. On their website, the Girl Scouts give a little bit of explanation to put your mind at ease:

Girl Scout cookies are produced by two bakers. That’s why some of our cookies have two different names! But whether the box says Samoas® or Caramel deLites®, these two cookies are similarly delicious.

The two cookies actually contain a few noted differences. According to Babble, those differences include size, uniformity, and shape, among other slight variations. The Caramel deLite, for example, generally contains slightly more caramel, more uniform chocolate, a hexagon shape, more sugar, and is noticeably smaller in size. On the other hand, the Samoa is larger, more rounded, has toastier coconut, contains darker chocolate, and more calories.

Chief Communications Executive for Girl Scouts of the USA, Kelly Parisi, told Babble that having more than one baker allows the Girl Scouts' capacity for production to become much greater, and in turn, better support the Girl Scout Cookie program, and the ultimate reason behind the two different names is trademarking.

So now that you know the full story and differences behind Caramel deLites and Samoas, it might be time to get your hands on a box of each and put them to your own personal taste test. Each Girl Scout council decides which distributor (bakery) they want to work with, so getting ahold of a box of each only requires a quick phone call or Internet search.