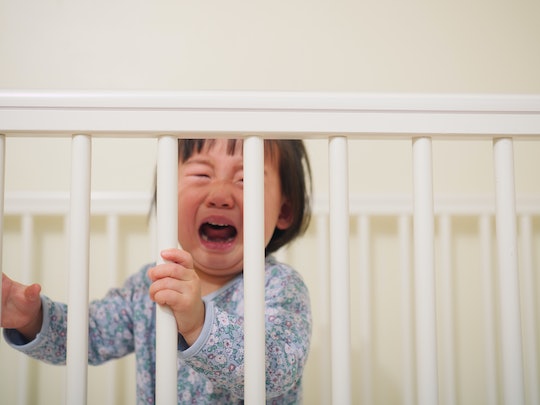 Night Terrors & Nightmares Aren't The Same, So Here's How To Tell The Difference

Comforting your small child after a scary nightmare can really pull at a parent's heart strings. You would do anything to protect your kids and make them feel safe, so to be completely helpless over what they experience in their sleep is a hard feeling. And while you know that having the occasional nightmare is a very normal part of growing up, some families seem to face them far more intensely than most. So how do you know when you're dealing with something more than just bad dreams? What's the difference between night terrors and nightmares?

Professional Sleep Consultant Christine Stevens tells Romper that when you know what you're looking for, it's pretty easy to tell the difference between night terrors and nightmares. "Night terrors can be scary to watch, but if you try to talk to your child, their reply might be just babbling or incoherent talk because they aren’t really awake. During night terrors, children will tend to scream out and the event can last anywhere from a few seconds to a few minutes." When a child has a nightmare on the other hand, Stevens says he or she will be able to converse with you and tend to recall some or most of the details of the dream.

But the differences don't end there. According to Stevens, nightmares happen during REM (Rapid Eye Movement) sleep in the early morning hours, while the more rare night terrors tend to occur during the deepest sleep at around midnight or earlier. If you're confused on which one your child is experiencing, you could start by analyzing what time of the night they're waking up.

If you believe that your child is having a night terror, Stevens advises that you stay calm and focus on keeping them safe. Falling out of bed can often be a risk, and it's important to lock all windows and doors to prevent sleepwalking accidents. As distressing as the experience probably is for you as the observer, your child more than likely won't remember anything about it after they wake up.

Nightmares require more talking with the kid. "If your child has had a nightmare," Stevens says, "It’s best to be supportive and reassure them that bad dreams are normal; it’s simply the way their brains process information. Try to help them think of something more positive as they go back to sleep." The sleep consultant doesn't advise parents to comfort their children by letting them get into mom and dad's bed, unless they are willing for that sleep arrangement to become a long term pattern.

According to an article in Parents magazine, night terrors are a type of sleep disorder known as parasomnia and are most common between the ages of 4 and 12, though they can begin even earlier. Interestingly, night terrors are more common in boys and have a tendency to show genetic correlation. The medical community is still uncertain about what exactly causes night terrors, but there is consistent findings that they seem to be triggered by stress, sleep deprivation, and fatigue.

Neither nightmares nor night terrors are actual health concerns, but they are understandably distressing experiences for parents who feel responsible for their children's peace of mind. Sometimes seizure-like episodes accompany night terrors, which might tempt you to make a trip to the emergency room, but they are actually not harmful. Slight fevers have also been known to occur.

But take heart, moms and dads: in either case, nightmares or night terrors, all your kiddo really needs from you is a calm demeanor and a lot of patience. Given time, these sleep disturbances are stages that pass, and one day you'll all be getting more sleep again.