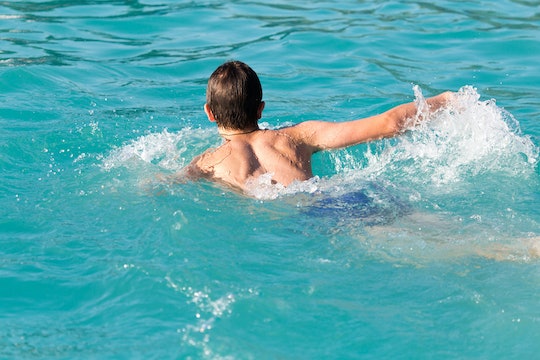 Secondary drowning is when water gets into your lungs and causes fluid to build up over a period of about 24 hours; dry drowning is when you get water in your vocal cords, causing your vocal cords to spasm and cut off your airway, explained WebMd. Dry drowning is something you'd notice shortly after the water inhalation incident, rather than in the hours afterward, and both are very rare. "They make up only 1-2% of all drownings," said pediatrician James Orlowski MD, of Florida Hospital in Tampa, Florida on WebMD.

Both secondary and dry drowning involve your child inhaling water through their mouth or nose, which you or another adult would likely witness. If your child has inhaled a large amount of water or had a near-drowning experience in pool, lake or ocean, you would start to see the signs of dry drowning, or "post-immersion syndrome," as doctors call it, shortly thereafter, said Healthline, if they are suffering from it.

Healthline also advised that if your child is having difficulty breathing or speaking, unusual behavior, coughing, chest pain, or a drop in energy levels after a near-drowning incident, you'll want to have them evaluated by a medical professional to ensure they aren't experiencing dry drowning.

You'll also want to look out for those same symptoms in the hours after your child has inhaled a large amount or water or almost drowned. In an interview with American Osteopathic Association (AOA), Dr. Mark A. Mitchell explained, "Many parents don't recognize the signs of delayed drowning because they believe their child is fatigued from a long day of swimming, or exhausted from nearly drowning."

If you get your child medical attention quickly, he or she can be treated to improve their oxygen intake and alleviate their symptoms. If not, dry drowning and secondary drowning can be fatal.

Prevention of near-drowning incidents is the best way to prevent dry or secondary drowning from occurring in the first place. The AOA recommended teaching your children water safety, including only swimming where lifeguards are present; teaching your children to swim as early as possible; and never letting children swim alone. These tactics can help prevent active drowning as well as delayed drowning.

However, the terms dry drowning and secondary drowning can be controversial. Water safety expert Dr. Linda Quan explained in an interview with the Red Cross that the terms are medically inaccurate and can lead parents to believe that their children could develop drowning symptoms out of the blue, days or weeks after a water incident. "The use of these terms is discouraged by many organizations, including the World Health Organization, the U.S. Centers for Disease Control and Prevention, and the American Red Cross," because they are inaccurate and were used before experts understood the causes of drowning.

Dr. Quan explained, "Drowning deaths do not occur due to unexpected deterioration of a person's condition days or weeks later with no preceding symptoms. Brand new symptoms that develop days later are extremely unlikely to be related to the drowning episode."

No matter what terminology you use, it's important to understand the differences between the two types of respiratory distress that can happen after a water incident so that you can look out for the signs both immediately after and in the hours that follow.