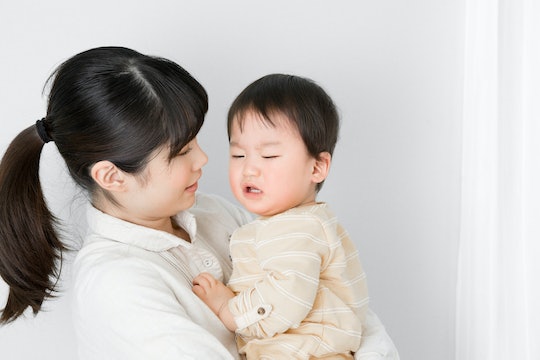 Here's The Difference Between Teething & A Sleep Regression, According To A Pediatric Sleep Expert

My boys are all, for the most part, finally past the stage of night wakings, but I can remember the days with all three when I was convinced I would never sleep through another night for the rest of my life. With each, I obsessively analyzed the potential causes: The temperature of the room, uncomfortable diapers, needing to be close to me, sleep regression, teething pain — it was often a guessing game but usually came down to the last two. So what's the difference between teething and a sleep regression? It can be pretty hard to figure out.

According to pediatric sleep specialist Tracie Kesatie, "sleep regression describes a period of time (usually a couple of weeks) when a baby or toddler who has been sleeping well suddenly starts waking at night, and/or not napping well for what appears to be no apparent reason." But there actually is a reason, Kesatie tells Romper, "Sleep regressions usually accompany a developmental leap. There are several sleep regressions that happen over the first couple of years, but your baby or toddler may be impacted by some more than others."

So, when do these sleep regressions typically happen? Kesatie reveals that the most common ones are at 4 months, 8 to 10 months, 18 months, and 2 years. While teething often carries with it a wide variety of symptoms (drooling, mouthing everything, swollen gums, crankiness, ear pulling, changes in eating and sleeping habits), sleep regressions usually only correlate to new developmental milestones and a change in appetite.

The best way to try to tell the difference between teething and a sleep regression, Kesatie explains, is to observe your baby during the day rather than obsessing over symptoms at night or during nap time. How is he behaving during playtime? Do you notice any of the symptoms of teething? Is she on the verge of crawling or walking?

Asking these questions during waking hours may get you to the root of the problem more quickly, but you then still have to decide what to do about it. Whatever the cause, Kesatie maintains, the best course of action is simply to provide comfort and try to maintain as consistent a schedule as possible. If you remain attentive and predictable, you're sure to meet your old friend sleep again one day. Until then, make friends with caffeine.

More Like This
9 Bedtime Mistakes That Are Keeping Your Baby Awake & How To Fix Them
Why Does My Baby Cough While Breastfeeding? Experts Explain
Double Your Fun With These Instagram Captions For Twin Pics
There's A Good Reason Why Your Baby Is So In Love With CoComelon