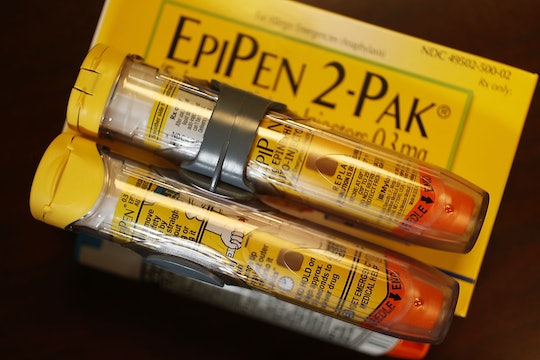 What's The Difference Between The Generic Mylan EpiPen & The Expensive One?

Even though none of its potential competitors have succeeded in developing a product to rival its branded allergy auto-injector, pharmaceutical giant Mylan announced Monday that it will soon offer a generic alternative for half the price. The move stems not from benevolence or from the $23.7 billion-drugmaker's suddenly growing a conscience, but from widespread outrage and criticism that it has needlessly hiked the price of the lifesaving antidote nearly 550 percent over the past eight years, according to The Wall Street Journal. The list price for the branded version is about $600, and the off-brand tool will hover around $300 — but what's the difference between the generic Mylan EpiPen and the expensive one?

Mylan's decision to replicate its own product in generic form came after government officials, healthcare professionals, and parents whose kids need the epinephrine the EpiPen delivers to survive an allergic reaction publicly shamed the company. And the shaming underscores how unnecessary the exorbitant price is. That's because although a two-pack of the generic EpiPen — scheduled to become available within the next "several weeks" — will cost half of what the original currently does, the two products will be identical, according to a press statement the company released Monday. The only difference will be in packaging and the apparent goal: more families' ability to afford the latter.

Last week, amid the onslaught of bad press and the growing scandal surrounding the incredibly high price for the product that reverses anaphylactic shock, Mylan began offering some customers a coupon that would reduce the cost of a two-pack to $300, as well as doubling the eligibility for its patient assistance program, meaning that a family of four making up to $97,200 wouldn't incur any out-of-pocket costs for the product.

The reactive changes to the pricing policy are frustrating for many, who believe that, because the list price did not budge, consumers would still ultimately shoulder all the costs through higher insurance premiums, according to USA Today. But in an interview with CNBC the day of the announcement, Mylan CEO Heather Bresch said that, actually, "No one's more frustrated than me," about the state of the healthcare system that she believes created the climate in which the EpiPen now costs more than $600, compared with $57 they cost when Mylan first acquired the rights to sell them.

The system, she said, requires patients who need the drug to pay insurance premiums as well as out-of-pocket costs for prescription medications. Also, the fact that a series of middlemen involved in the process of selling the pen, including wholesalers, retailers, and pharmacy benefit managers, contribute to the increases in cost.

Most Mylan critics are unswayed by the company's justifications, convinced that the drugmaker actually increased the price to $600 in anticipation of losing its monopoly on selling the device. USA Today reported that a competitor, Teva, has developed a product to rival the EpiPen, and that Mylan sought to maximize its profits ahead of its release. But the U.S. Food and Drug Administration has delayed the product's timeline for hitting the market until next year, saying that it's not yet ready for public consumption.

So, although it originally opted to increase prices because it could, Mylan is now essentially competing against itself to appease the public and policymakers with the generic form of its product. In the release outlining the plan to get it on the shelves, Bresch detailed the company's rationale:

... Because of the complexity and opaqueness of today's branded pharmaceutical supply chain and the increased shifting of costs to patients as a result of high deductible health plans, we determined that bypassing the brand system in this case and offering an additional alternative was the best option. Generic drugs have a long, proven track record of delivering significant savings to both patients and the overall healthcare system.

Regardless of why Mylan decided to slash the price of its product, it's undoubtedly good news for people who need it to protect against the results of allergic reactions to everyday threats like peanuts and bee stings. It may still be more expensive than it needs to be for the company to make a profit, but it's definitely a step in the right direction.