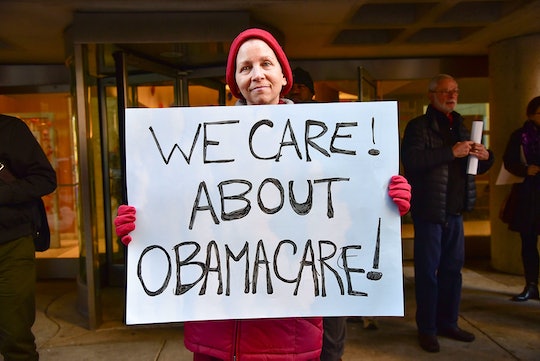 How Quickly Can Trump Repeal Obamacare?

President-elect Donald Trump won the 2016 election in part because he promised supporters that he would repeal the Affordable Care Act, the healthcare legislation that many Republicans are less than thrilled about. But a lot depends on how early Obamacare can be repealed and Trump, along with the GOP, will definitely face backlash from Democrat lawmakers and Americans who depend on the legislation.

Over the weekend, vice president Joe Biden pointed this out to CNN's Jake Tapper, in the most Joe Biden-way possible: straight talk. Biden said, "You wanna repeal Obamacare? Go ahead and repeal it. See what happens." Tell us how ya really feel, Joe.

Biden pointed out that he thinks it's going to be difficult for Republicans to "all of a sudden" go back and start charging women more than men for healthcare or for pre-existing conditions. Or that kids can't stay on their parents plans while they're trying to launch their own careers (and then get their own health insurance).

The ACA, or Obamacare, is not perfect. But it did the lay the groundwork for healthcare reform. "We knew you had to improve the ACA, we knew from the beginning," Biden told Tapper. It's going to be a really hard for the GOP to just wipe the slate clean and start over. Or is it?

Trump has promised to start repealing "a lot" of laws on his first day in office, so the ACA could be at at the top of the list. So it will have priority over things, which is an advantage. In addition to it being one of the most important things "to do" once he sits down in the Oval Office, House Republicans are planning on gutting Obamacare through a budget reconciliation process, which means that they just need a simple majority (which they have), instead of trying to convince Democrats to cross the aisle.

The thing is: there's no plan yet about how to replace Obamacare. And even some top Republican lawmakers are worried about dismantling the budget for the healthcare act and then just sitting around waiting for someone to come up with another, better plan. Last week, some GOP lawmakers were talking about a two or three year delay to the repeal.

It's a funny situation they're in: they don't like some provisions and the money it costs, but know that it's popular with many voters. They also don't want to mess around with a replacement plan that some voters might object to before the 2020 election. (Yes, lawmakers are already wringing their hands about 2020 and playing politics around the next election.)

Since Trump is planning on moving fast when it comes to making good on his promises, it's likely that they'll go with option two. Even Paul Ryan wants to rush the repeal of Obamacare and worry about replacement later. Trump spoke about the ACA at his New Year's Eve party, so it's definitely on his mind. But since he hasn't given a press conference or released a definitive plan yet, it looks like everyone will just have to wait and see what happens to Obamacare and when.