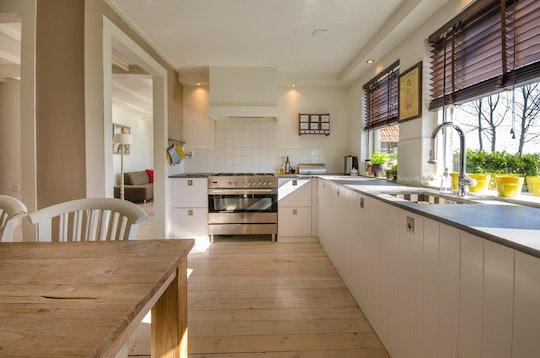 Let's get real here for a minute. There is a lot of gross stuff going down at your home at any given time. Think about it — even the cleanest homes have tons of germs on most surfaces, and that's only what you see and touch everyday. Think about all of the things that lurk beneath the surface. On your mattress, in your drain, in the sealing ring of your instant pot that you just keep forgetting to clean — dang it, you'll get to it eventually. But, what's the grossest thing in your house by far? It might not be what you're expecting.

As it turns out, the grossest thing in your house is actually something you use to clean your house with — your kitchen sponge. Yes, that little rubbery scratch pad is a practical nightmare of bacteria and possible illness. It doesn't matter if you're cleaning with bleach or vinegar — those pores are like little petrie dishes that you use to spread their filth from one surface to the next.

Honestly, I thought it was going to be my phone. Even with my penchant for antibacterial wipes, I set it down everywhere, touch it all the time, and it gets more action than John McClane on Christmas. After that, I thought maybe it was the seal on fridge. I mean, I just cleaned mine last week, and I think I saw a tiny, top hat wearing clown on a tricycle riding around inside it. I was so ashamed.

I spoke with bacteriologist Dr. Kimberly Walker, PhD MT(ASCP), and she tells Romper that the grossest thing in your house by far is your kitchen sponge, and for good reason. Researchers found that there are up to 54 million bacteria per cubic centimeter of your favorite yellow and green cleaning buddy. The moist environment of the sponge that you use to clean dishes, wipe countertops, and clean up spills in the microwave is the perfect breeding ground for all sorts of little germy devils. Dr. Theodore Muth, PhD from Brooklyn College, tells Romper that "things like phones and dish sponges" are referred to as fomites in this context and they "collect and transfer microorganisms, but it is hard to know how many cases of disease or infection can be directly traced to a dish sponge or a phone." He says, however, that with regular disposal, it's not altogether that scary.

Walker suggests using paper towels to clean up around your house, which can be easily thrown away. Yes, it seems wasteful, but it makes sense, especially if someone in your home is immunocompromised, or, say, pregnant. This might be overkill for most houses, though. According to Discover Magazine, most households should simply replace their sponges once a week to avoid a massive buildup of potentially dangerous bacteria, which, arguably, is more waste given the fact that these sponges aren't biodegradable, and paper towels are. There are several brands of paper towel that are also made with 100 percent unbleached, recycled material. However, you can also use washable rags, noted University of Nebraska, Lincoln, but make sure to wash them every few days and dry them on high heat. The combination of hot bleached water plus high heat dry does a good job at eliminating most of the bacteria.

Although, don't burn your kitchen down yet. Microbiologist Jack Gilbert told Time magazine that most of us live with lots of nasty pathogens on a daily basis and don't get sick. In fact, he found that we get accustomed to the flora of bacteria of our home, and it responds to us. So much so that a scientist could identify a family simply by examining the bacteria of the space they inhabit. It's fascinating science and reassuring to those of us who are a bit germaphobic. Or I've just given you nightmares. It could really go either way.

In the end, if you follow proper cleaning protocol, and yes, that includes that ring on the instant pot, then all should stay well at your home. That's not to say you'll never get a cold (we all know we do and will), but we can minimize our risks for such occurrences. And we should.