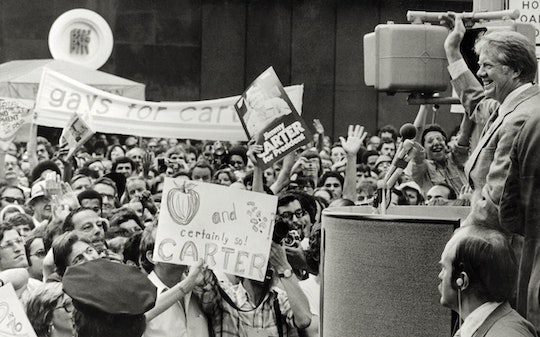 What's The History Of The Conventions? They Used To Be Quite The Rowdy Affair

Whether you're a Democrat or a Republican, I think we can all agree that this has been one of the weirdest primary seasons in recent years. Both parties now have their presumptive nominees selected for the November general election, but Donald Trump and Hillary Clinton won't officially become their parties' candidates until the national conventions later this month. You might be wondering why there's such a long wait before a formal announcement, or why the parties bother with a national gathering at all. That's a question best answered by going back through the history of the political conventions, which should also give you an idea as to what you can expect from the conventions this year.

Political conventions have been around for a while now — but voting wasn't always quite so inclusive. The first Democratic National Convention was held in 1832, and the Republicans followed shortly after, holding their first national convention in 1856. However, neither of the two parties was actually the first to host a nominating convention in the United States — that honor went to a third party called the Anti-Masonic Party, which had its first convention in 1831.

The Anti-Masons were the first party to leave nominations up to a wider array of voters; up until then, the Democratic and Republican parties had selected nominees through Congressional caucuses, which excluded most of the general public. (On a side note, the Anti-Masonic Party was also the first to offer up an actual party platform, a practice which all parties eventually adopted — and have continued to this day.) Thanks, Anti-Masons!

In the early years of political conventions, however, there were no state primaries or caucuses, and there were no delegates. That system didn't come into play until around 1910, according to Public Radio International. Before that, each party had only one shot at a nominee: one long, ongoing nightmare of a convention every four years, in which the higher-ups in political parties gathered, cast ballots, and argued a lot. The result? There were many contested conventions that could drag on for days before a nomination happened.

That said, convention drama didn't necessarily stop once primaries and caucuses came into play. For example, in 1924, two Democratic frontrunners — William G. McAdoo and Al Smith — essentially canceled each other out in the primaries, which led to an open convention that lasted a record 16 days and 103 ballots. In the end, neither of them got sufficient votes, and a "dark horse" candidate took the nomination instead, as a sort of moderate compromise between the two extremes: In a strange plot twist, John W. Davis went on to run as the Democratic candidate.

Other "contested" or "brokered" conventions have happened since — with plenty of fists and unkind words slung across convention floors — but these days, they're a pretty tame affair. Nowadays, conventions are fairly scripted and mostly a show of lights, music, and speeches. Unfortunately for the political drama queen within us all, this year is unlikely to be different: both Donald Trump and Hillary Clinton have the necessary number of delegates needed to clinch their respective parties' nominations, so it's unlikely that we'll see an open Democratic or Republican convention this year.

However, this year's political conventions should still be worth watching. Each party will have the opportunity to set their agenda for the next four years and show some party unity (which, ahem, has been rather lacking this year). And who knows? With the way this year has been going, we might even see a few curveballs sneak in to the conventions — and that's something you wouldn't want to miss.