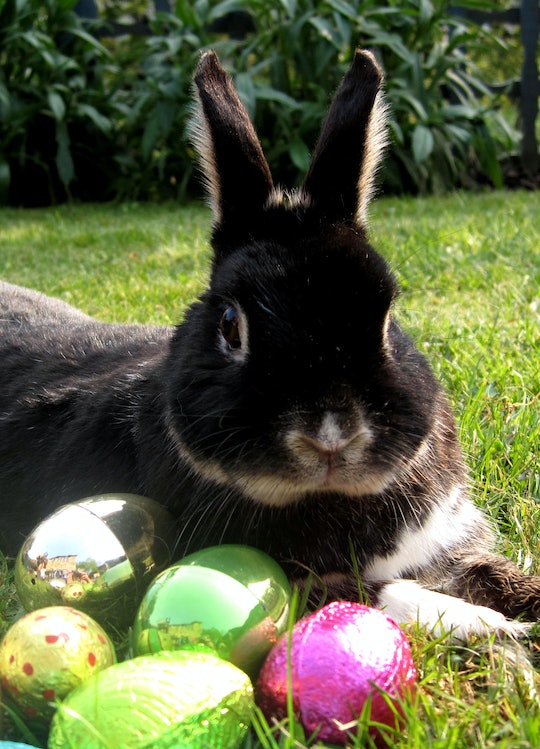 What's The History Of The Easter Bunny?

When you think about it, the story of the Easter Bunny sounds pretty bonkers. A rabbit sneaks into your house, and leaves candy and colored eggs for the children to enjoy. If it weren’t for the inherent cuteness of said animal and the deliciousness of the sweet treats, this scenario would be kind of unsettling. So what’s the history of the Easter Bunny anyway, and how did a resurrection story get associated with it?

It turns out the traditions and stories that combined to make up what we think of as the Easter Bunny are older and stranger than you might realize. Its roots may be found in Pagan lore, as well as fertility symbols from Germanic traditions. Yes, that dude in a rabbit suit at the mall is harkening back to some centuries-old folkloric traditions.

As the springtime corollary to Santa Claus, the Easter Bunny is one of those many holiday stories that parents instinctively tell children (if only because bribing them with mythical creatures who reward good behavior with candy is an effective bargaining technique). But when you say “be good because the Easter Bunny is watching," you’re calling back to a creature with a pretty deep history. In fact, in the 1700s there were probably parents bribing their kids by saying “Be good because the Osterhase is watching.” Maybe much of folklore is just the work of clever parents who wanted their kids to settle down for a few minutes.

So there's no mention of a giant egg-gifting rabbit in the Bible. How did this become associated with Easter celebrations? "One theory is that the symbol of the rabbit stems from pagan tradition, specifically the festival of Eostre—a goddess of fertility whose animal symbol was a bunny," Alexandra Sifferlin reported in Time. "Rabbits, known for their energetic breeding, have traditionally symbolized fertility." So rabbits are a symbol of springtime and new life, because they breed like, well, rabbits.

Associating rabbits with springtime celebrations doesn't take much of a leap. But what about the character of the Easter Bunny as we know it today? That one goes back a few hundred years. "By 1680, the first story about a rabbit laying eggs and hiding them in a garden was published," Trace Dominguez wrote in Discovery News. "These legends were brought to the United States in the 1700s, when German immigrants settled in Pennsylvania Dutch country." As the stories of this Osterhase — or Easter hare — grew, the prevalence of the Easter Bunny in American culture took hold. Children made nests for the rabbit's eggs, and over time "the custom spread across the U.S. and the fabled rabbit’s Easter morning deliveries expanded to include chocolate and other types of candy and gifts, while decorated baskets replaced nests," as noted by History.com. So when you're assembling that basket of Easter goodies for your kids this year, you're taking part in a tradition with early American, German, and even Pagan roots. Who knew Peter Cottontail had such a storied past?