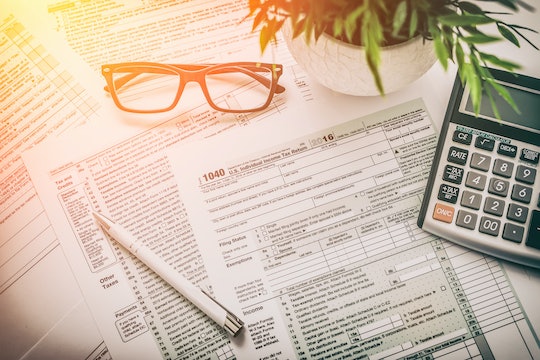 The Deadline To File For Extension Taxes Is Coming

If your taxes look like they won't get done before the mid-April deadline, then you still have some options. (And no, changing your identity to avoid trouble with tax evasion is not an option.) The IRS does offer the choice of an extension for filing your taxes, but there are a few extra things to keep in mind if you pursue this alternative. Knowing what's the latest you can file for extension taxes, and following all of the IRS's rules, can make your 2017 tax season relatively stress-free.

If you do need extra time to file this year, then you aren't out of luck. According to Investopedia, anyone can file for an automatic six-month tax extension by filling out Tax Form 4868. It's important to note, however, that the Form 4868 is still due by April 15, as explained in File Later. (For 2017, tax day falls on April 18, so you get even more time to file.) With that said, you may want to mark October 16, 2017 on your calendar, because this is the due date to file income taxes that were delayed thanks to Form 4868, as noted by the US Tax Center. With that said, if you're in dire need of more time to file this year, then the extension can save you a lot of stress.

As with most things related to the IRS, it's important to read the fine print and pay attention to all of the additional rules that come with a tax extension. For instance, it's important to remember that an extension to file your taxes does not mean you get any extra time to pay them. According to IRS.gov, to avoid penalty and interest charges, most taxes will need to be paid by April 18, 2017. To avoid complications, you may want to pay your estimated income taxes before the April deadline.

If the rules and regulations surrounding tax extensions are making your head spin, don't hesitate to reach out to a financial professional for help and advice. Most everyone's tax adventure is unique, and there's no harm in getting help with this inevitable task. Remember that getting your taxes filed for the year, whether in April or October, is one of those chores that feel great to knock off your to-do list.