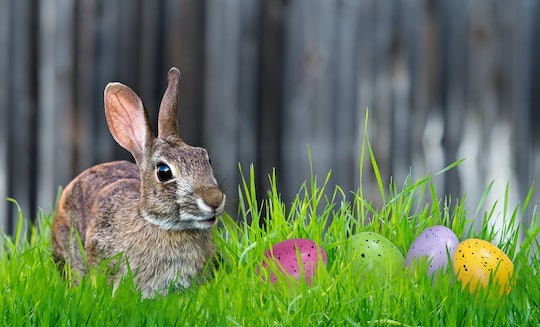 The True Origin Of The Easter Bunny

Children may not exactly understand what Easter is all about, especially if they don't come from a religious family. But you'd better believe that come April 16, they'll be expecting a rabbit to deliver a basket full of goodies. But why? Is the Easter Bunny just another ploy to get children to behave, or is there some deeper meaning behind why everyone worships a candy-carrying bunny come springtime? If you've been wondering what a rabbit who delivers colorful candy eggs has to do with a religious holiday, you may be asking, what's the origin of the Easter bunny?

As noted in TIME, Christians celebrate Easter as the Resurrection of Jesus. But some may argue that the adorable floppy-eared Easter Bunny is just as important, especially to children. But what do bunnies and eggs have to do with resurrection, especially since as Seeker.com noted, rabbits do not lay eggs?

According to History.com, rabbits are an ancient symbol of fertility and new life, as they typically give birth to large litters of babies. They went on to mention that the Easter Bunny is thought to have come to America from German tradition. In the 1700s, children decorated nests for the special rabbit to lay colorful eggs in. As the tradition gained popularity in the United States, the gifts grew to include candies and gifts.

But if all of that has you worried that there is nothing that links bunnies with religion, you can rest easy. According to Catholic Online, it was once believed that rabbits could reproduce as virgins, which caused them to be associated with the Virgin Mary in Christianity.

Now that you know where the bunny comes from, you'll have a better understanding of what the tradition is all about when you and your family are decorating eggs this Easter. But if you'd rather keep everyone else in the dark, you can still use the Easter Bunny as a way to keep you kids in line for a few weeks.