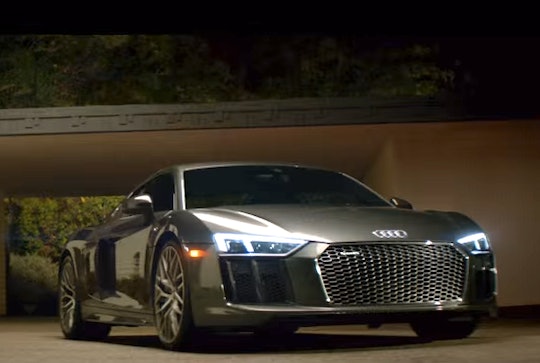 What's The Song In The Audi R8 Super Bowl Ad? Prepare The Tissues

For many people, the Super Bowl is about the commercials. Companies pull out all the stops to get one of the biggest captive audiences of the year laughing, tearing up, and wanting to go out and buy things. Audi released its Super Bowl ad on Wednesday and, for many reasons, it's a tearjerker. The soundtrack is stirring, to say the least, but many younger viewers may be wondering what's the song in the Audi R8 Super Bowl ad? Music fans, get your tissues ready.

Part of the heartbreak of this ad is that the song is by none other than the late, great David Bowie, who died of cancer last month at the age of 69. His death capitulated a wave of Bowie-remembrance, and his psychedelic, astronomical album, Ziggy Stardust, enjoyed a reverent kind of renaissance. The song featured in this ad is called "Starman" and it's from that album. Though it's hard to say how Bowie would have felt about being featured in a car commercial, he no doubt would have enjoyed knowing that people are still singing along to this soaring tune, and that maybe they haven't forgotten how to dream about what else is out there in the universe.

As for the ad itself, it's extremely well done. The scene opens on a comfortable, well-decorated living room. An old man sits on a couch in front of an untouched tray of food served to him by an in-home nurse of some kind. A swift pan across a built-in shelf reveals that he's had quite the life. There's a photo of him as a young astronaut, a model of a lunar lander, awards, more photos. But here in the present, he's so different: a silent, unsmiling old man. An eerie twang and a lens flare tells us, though, that he's special. His son enters the room after surreptitiously asking the health aid if his father is eating. She says, "Nope." He asks his father to come with him.

Outside the stylish mid-century house is, yes, you guessed it: an Audi R8. The son hands his father he keys, and, quietly, Bowie's voice bleeds into the background. "Starman" builds as the old man takes the driver's seat, and suddenly, a crescendo, and the present is being spliced in with an epic scene from the this man's past. He's walking onto a spaceship, his helmet's on, the countdown, the ignition turns over, and we have liftoff.

The power of the car revs up this man's memory of space flight — the excitement of it, the novelty — and takes him, momentarily, out of the drab reality that has come to color his twilight years. The Audi R8 is selling itself as an escape, a reminder of a more ambitious, and perhaps simpler, time. It's got the velocity, so the pitch goes, to get people out of their ho-hum present, to the stars, to the moon. The gentleman in the ad was a true "Starman," and to see what he's become reveals a kind of existential human sadness. The ad doesn't show viewers, luckily, what happens when they have to stop driving.

One can't repeat the past, but, with music, and however much this car may cost, one can recall it. It's a very persuasive ad, and more importantly, it uses Bowie's song in the most effective way.