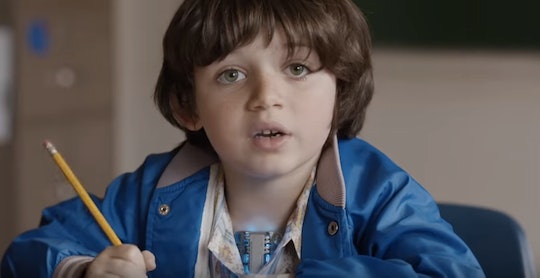 What's The Song In The Hyundai Super Bowl Ad? The Ad Tells A Strange Story

Hyundai released three of its Super Bowl 50 commercials this week, to varying levels of success. The most terrifying of the ads has one redeeming quality, which is its soundtrack. So, what's the song in the Hyundai Super Bowl ad? Because it's the best part.

The ad in question follows a boy through his life as he meets and surpasses life's various trials: birth, learning to walk, going to school, first crushes, first love, the infinite sadness of studying alone in some hallowed university library, then, finally, finding his place among other people like him at Hyundai, where he gets to sketch cars for his job. Oh, and there's this weird thing about him: his heart has been replaced with an exposed V8 engine. I can see this sounding like a good idea around a conference table. ("We all have hearts. They are what make us go, and keep us going. Engines are the very same. Engines, hearts. Get it?" General nodding all around.)

It all hinges on that last line, "better is the engine that drives us," etc. Sure, that's all well and good. But the commercial makes you sit through two kind of creepy minutes of watching the oddly insect-like, blue engine heart, with glowing pistons cranking on this poor kid's sternum like a robotic parasite. It hardly matters what heartwarming things are going on in his life; the weird engine-heart steals the show and is, frankly, more than a little strange.

But on to the question at hand: what is that song? The best decision this creative team made was choosing a lovely melody whose lyrics even chronicle childhood, and the heartbreak of growing up. "When I was a boy," the singer croons in the background. That happens to be the very name of the song as well, and it is the latest from Jeff Lynne, beloved singer of ELO, or Electric Light Orchestra. The song is of off Lynne's 2015 release Alone in the Universe.

When asked about the song, he told Rolling Stone, "My interest in music grabbed me when I was a boy. I used to go under my bed listening to The Crystal Set. There weren’t many good stations back then. You only got about an hour of pop music and that was on a Saturday night.”

It's a charming story, and a charming song, unfortunately marred by a kind of frightening machine. The spot is part of Hyundai's "Better" campaign, which aims to paint the company as a collective of well-meaning geniuses, working tirelessly to make the world a better place. Luckily, the other two ads the company is pushing this Super Bowl season aren't quite as, um, scary. One features Kevin Hart, another Ryan Reynolds, who they portray as a real heart throb (see the heart theme? See what they did there?).

Look, even Autoguide.com thinks this is creepy, and the company love engines. To be clear, this is not the only time Lynne's music has been used by Hyundai. Apparently the company really likes him. They used ELO's very catchy "Evil Woman," in a 2014 commercial that did not feature any engine-hearts, thankfully. The commercial is super interesting and science-y, even if it's a little weird. And Lynne's song really gets the point across.