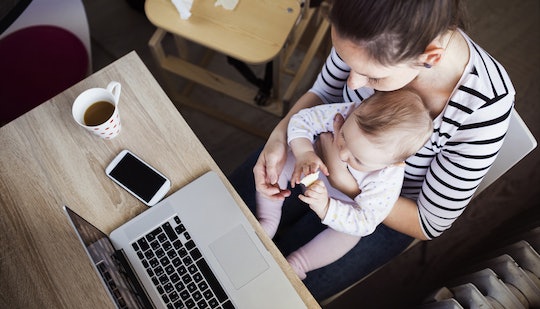 Being a parent is already pretty darn hard, but being a working parent presents a whole new set of struggles and challenges. However, a new piece of legislation has caused many to believe that a major part of these struggles could be changing. And that's exactly why it's so important to understand what the Workflex Act actually is, because this new bill introduced in Congress last month could make working parents' lives much harder.

As reported by HuffPost on Wednesday, the bill, co-sponsored by two Republicans — Rep. Elise M. Stefanik of New York and Rep. Cathy McMorris Rodgers of Washington — could actually give states the right to ignore several federal mandates relating to working parents and paid leave, such as predictable work schedules and a certain number of paid sick days. As HuffPost explained the bill:

Although Congress has yet to pass the bill, it's still worth knowing about because working parents in the United States already struggle — and, should it pass, this bill could make their lives even harder. And it's not just paid time off that's at risk; as mentioned previously, if the Workflex Act passes as is, states could do away with fair scheduling policies — which mandate that parents have set work schedule in place so they can, for example, arrange child care — and paid sick days, as well.

As just about every parent knows, having paid sick days from work are vital. For example, it can ensure that, if their child becomes ill, they're able to stay home and take care of them. And as HuffPost put it, the Workflex Act is basically a step back from the progress that's been made so far:

Under the Workflex Act, at a normal-sized company in the U.S., a full-time employee who has worked for the company for 1-5 years could take 12 paid days off per year, but that includes all sick days, all vacation days, and up to 6 employer-imposed holidays. Unlike existing sick day laws, there are no designated sick days.

While the Workflex Act might seem like it's geared towards helping families, it's actually "deceptively named," according to national online and on-the-ground organization Moms Rising, whose mission is "to increase family economic security, to end discrimination against women and mothers, and to build a nation where both businesses and families can thrive."

In fact, the CEO of Moms Rising released a statement on the proposed bill, condemning it as a "sham that would do more harm than good." According to Kristin Rowe-Finkbeiner, far too many parents already struggle with what to do if their child becomes sick when they have to go to work. "To address this crisis, 40 jurisdictions, including eight states and many major cities, have or will soon have paid sick days laws in place," she explained in her statement, adding:

The Workflex in the 21st Century Act would stall or reverse that state and local progress. It is unfair, undemocratic and unworkable, and would be a step backward for the country. It would endanger paid sick day guarantees for the 13 million people who have gained access thanks to state and local laws.

Of course, many would like to see parental and sick leave expanded upon in the United States, but many are arguing that the Workflex Act isn't the means to do so. In a statement to Romper, Sara Alcid — Campaign Director for the Workplace Justice of Moms Rising — explained:

The bill allows employers to subtract up to six federal holidays from the minimum PTO requirements it outlines, leaving workers with as few as six paid days off for illness, vacation and personal time. Six days is nowhere near enough time for paid family and medical leave – paid time off to welcome a new child or care for a seriously ill family member.

However, one of the bill's sponsors, Rep. Stefanik said that "this important legislation would allow businesses to offer flexibility in their employment leave plans to suit the business and the employee."

There is another bill that's been introduced to Congress: The Healthy Families Act, which has the capability to expand upon existing sick leave laws, and help working families support each other, as HuffPost reported. According to the Human Rights Campaign, The Healthy Families Act "would provide employees the opportunity to earn a minimum of seven paid sick days (56 hours) per year to care for themselves or their families." The Workflex Act, on the other hand, would not provide the same reassurances.

The Healthy Families Act was clearly written with families in mind, while many fear that the Workflex Act was not — a difference that shouldn't be ignored as Congress goes to vote.