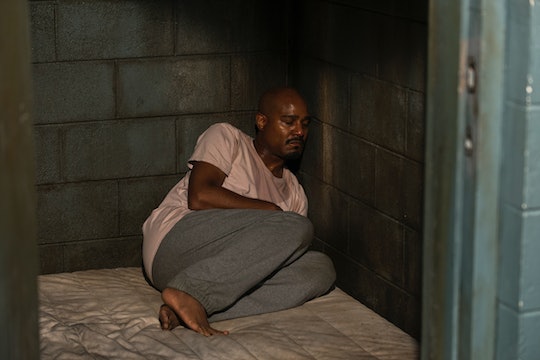 By the end of "The Big Scary U" on The Walking Dead, Father Gabriel was in a bad place. He was the latest Alexandrian to be taken prisoner by Negan, but that was the least of his problems. When Eugene went to visit Gabriel in his cell, he was sweating and shaking like he had a bad flu. But what's wrong with Father Gabriel on The Walking Dead? One thing's for sure: it's probably more serious than a case of the sniffles.

Gabriel seemed fine when he was trapped in the RV with Negan, and he seemed fine when he and Negan first arrived back at the Sanctuary. But in between something did happen that could have resulted in Gabriel's sickness. He and Negan decided to cut through the herd of zombies by disguising themselves with a veneer of viscera. That worked well enough at first, but then Gabriel tripped and it seemed to alert the undead to the fact that the living were among them.

Though Negan and Gabriel did their best to take out their attackers, they ended the scene under a pile of walkers. They appeared unscathed later on, but the fact that Gabriel became so ill could be an indication that he was bitten in the melee.

There is always a slim chance that Gabriel was not infected, and that he just coincidentally got sick with an unrelated illness. That has happened before on the show, like Andrea surviving a cold during a tough winter with Michonne or the epidemic at the prison. Perhaps Gabriel just got hit with the flu at the worst possible time, which is usually when the flu hits. But no one really believes that, do they?

The simplest explanation is usually the one that makes the most sense: if Gabriel was caught up in a heap of zombies and ended up sick as a dog shortly afterwards, then logic would follow that he was bitten and infected. Then again, it's not like characters haven't survived more dire situations without a scratch; Glenn was literally buried in zombies and avoided a nip, so there's a chance Gabriel really was unscathed.

The cast and crew of The Walking Dead aren't revealing anything about Gabriel's fate yet, either. Seth Gilliam, who plays Gabriel, hasn't confirmed or denied that this is the end of the line for the post-apocalyptic priest. When asked by Popsugar whether Gabriel was about to join the army of the evil undead or not, Gilliam would only say, "Uh, he's sick. That's as far as I can go."

The fact that Gabriel had arrived at a place where he accepted the possibility of his death could be a sign that he's going to die. His character has had a full arc since his initial introduction: a fearful and cowardly man became someone trustworthy, even occasionally brave. He's come full circle and that may mean there's not much more story to tell with him. His journey could be over. If Gabriel died at this point in the show, then he would get a more satisfying conclusion than many other characters who have been killed. Gabriel has shown real growth.

But The Walking Dead also likes to play with audience expectations. If everyone thinks Gabriel is a goner, then perhaps there will be an unseen twist. Maybe Gabriel is only faking sick to get out of his cell and either escape the Sanctuary or at least speak with Dr. Carson, a past ally. It's a method viewers haven't seen anyone else try, so it would certainly be a surprise. Things might not be looking good for Gabriel right now, but fans shouldn't count him out just yet.