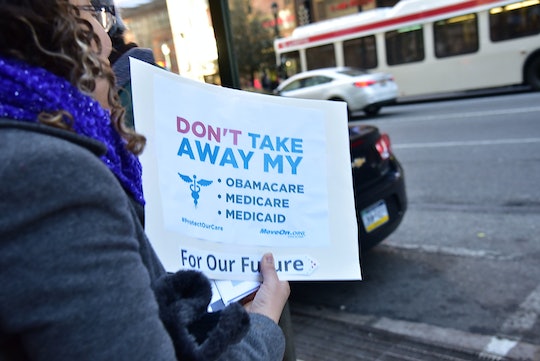 Here Are Some Real Problems With Obamacare

One of the promises of President-elect Donald Trump's campaign was that he was going to immediately repeal and replace the Affordable Care Act, also known as Obamacare. He insisted it wasn't working, and he also claimed that many Americans were angry and dissatisfied with their healthcare options under President Obama. He's since wavered on his plan to do away with the ACA entirely, but Trump has made it very clear that he is still very firmly against it. But what's wrong with Obamacare, really? The upside of the ACA is that millions of Americans currently have health coverage, according to CNN, which means that people who were previously uninsured or underinsured are now able to afford healthcare services. But there are problems with the Affordable Health Act, and Trump isn't totally wrong in his assessment.

In a tweet Tuesday morning, Trump wrote, "People must remember that ObamaCare just doesn't work, and it is not affordable - 116% increases (Arizona). Bill Clinton called it 'CRAZY.'" To be fair, RealClearPolitics clarified back in October that the Clinton quote was taken out of context, but Trump's anti-Obamacare message is certainly nothing new. And given that healthcare is such an important issue, Trump's claims are important to pay attention to. The President-elect has, after all, vowed to make changes to the way Americans access health insurance, and those changes will have a huge effect, for better and for worse.

If you haven't been supportive of Trump's agenda thus far, it can be hard to imagine that Trump's reformed version of Obamacare will be a good thing. But even supporters of the Affordable Care Act have acknowledged its very real shortcomings, and it seems clear that there is a fair amount of room for improvement.

It's Expensive, & Premiums Are Increasing

If you are already unhappy with your insurance under Obamacare, then you probably aren't looking forward to your 2017 renewal. That's because premiums will be higher — and many felt they were already high enough. According to Fortune, the average 2017 insurance premium was 25 percent higher than in 2016, marking "the biggest increase since the insurance first went on sale in 2013 for the following year." That meant that the average monthly premium has risen from $242 in 2016 to $302, although premiums also vary widely depending on where you are located in the country.

According to TIME, residents in Alabama, Georgia, Nebraska, and Pennsylvania will all see an average premium increase in the 30 percent range in 2017, while those in Minnesota and Tennessee could see an increase of 50 percent or more. In Oklahoma, the premium increase could be as high as 76 percent — which is a marked rise from the national average.

As for Trump's Twitter claim about Arizona's premiums increasing 116 percent? It's not as dire as it sounds, but many residents in Arizona will see a big increase. According to CBS News, some premiums in Arizona will increase by as much as 116 percent, going from $196 to a whopping $422. But since most people receive some kind of subsidy for the insurance costs, the actual increase will be much less. According to U.S. Department of Health and Human Services spokesperson Kevin Griffis, although “headline rates are generally rising faster than in previous years,” headline rates "are not what [most Americans] pay.”

Insurers Are Backing Out

One reason behind the premium hikes? Insurers in many states have been leaving Obamacare marketplaces, which results in a major lack of competition. According to Business Insider, large insurance companies like Aetna, United Healthcare, and Humana all withdrew from most Obamacare exchanges in 2016, due to lost revenue. In fact, in some states — including Alaska, Alabama, Kansas, North Carolina, Oklahoma, South Carolina, and Wyoming — there is only one participating insurer in every coverage region, and in August, residents in Pinal County, Arizona, were left without any coverage options at all, according to Politico.

Of course, that's not to say that there aren't still many places in the country where consumers have options for coverage, and where the ACA is working (Detroit is a good example). But the disparity is a big problem, and it is getting worse: according to Vox, 182 counties in the United States were left with only one Obamacare insurance carrier in 2016. But in 2017, that number will increase to 687 — nearly four times as many.

There's no question that Obamacare has had a big impact on those who were previously uninsured or underinsured, and the importance of that can't be underestimated. According to a report from the U.S. Department for Health and Human Services, more than 20 million uninsured Americans gained insurance coverage through Obamacare since its inception in 2010, including more than 6 million uninsured young adults. And in 2015, the uninsured rate fell to 9.1 percent (or fewer than 1 in 10) for the first time ever, according to CNBC, which is a major accomplishment.

But the benefits of Obamacare haven't been equal for everybody. The ACA has meant that insurance companies could no longer deny coverage to those with pre-existing conditions, and it made it more affordable for anyone who would normally be offered very expensive insurance coverage (older people, anyone who is sick or high-risk) to actually have health insurance. But in order to make it profitable for the insurance companies, enough young, healthy Americans had to enroll as well. The problem? According to The New York Times, many of them aren't actually signing up, and are opting instead to pay tax penalties for remaining uninsured.

Depending on where you live and how much you make, if you're young and healthy, it could actually be cheaper to pay the penalty than to pay for insurance coverage (especially if it comes with a high deductible). Those with low incomes can qualify for subsidies to make it more affordable, but otherwise, it just might not seem worth it. That leaves many middle-class Americans in a bind: pay for coverage they feel is too expensive, or risk going uninsured?

Of course, the fact that Obamacare has given much-needed health insurance to people who couldn't afford it before seems like it should outweigh the fact that those who can afford it have to pay more. But when those healthy, middle-class people leave the marketplace, it throws off the entire system. And that's not good for anyone.

But It's Still Not A "Disaster"

Even though there are problems with the Affordable Care Act, Trump's insistence that the entire program is flawed and should be scrapped isn't really accurate. In fact, Trump himself has said that there are aspects of Obamacare that he wants to keep, according to NBC News — namely the provisions protecting those with pre-existing conditions, and young adults who want to stay on their parents health insurance plans.

But even if Trump did want to repeal and replace the ACA, he'd have to come up with solutions for some pretty major issues. Most importantly, any new healthcare plan under Trump would need to address the concerns of the millions of Americans who need Obamacare to access affordable coverage. According to CNN, repealing Obamacare would leave an estimated 4.4 million children and 7.6 million parents without coverage, the vast majority of whom are part of families "with at least one person working part time or full time."

Even though Obamacare hasn't magically solved the country's healthcare woes, it has made some really important and crucial improvements. And they shouldn't be ignored based on one of Trump's tweets.