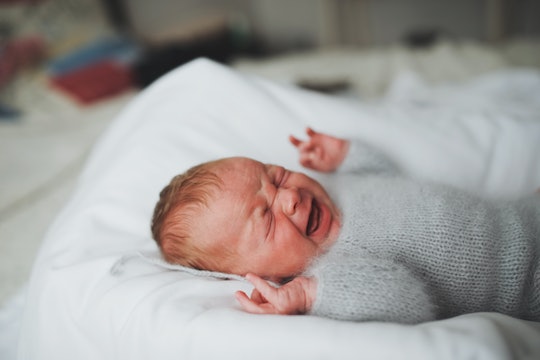 Why Some Pediatricians Don't Use A "Colic" Diagnosis Anymore

Katie Pannell's baby cried constantly from birth through 15 weeks of age. The only strategy that worked to ease the crying was holding her son constantly, and giving him a pacifier. At first, she ended up overfeeding him because breastfeeding was initially calming, but then he’d spit up everything because he was too full. In retrospect, Pannell says she may have had postpartum depression during that time given the high levels of stress and low amount of sleep. But because there was really “nothing wrong” with her baby, Pannell was never recommended to see a specialist or do anything different than she was already doing. Pannell is one of many parents who found a diagnosis of colic useless or even risky.

Ask a parent of a colicky newborn what it’s like and you’ll get something along the lines of exasperated groans with descriptions like “exhausting,” “isolating,” “depressing,” “helpless,” “desperate,” and “torture.” Countless sleepless nights and bouts of what seems like endless crying during the latter part of the day is enough to break an otherwise-jubilant new parent’s resolve. For all the mothers Romper spoke to, the worst part of colic was the diagnosis itself: it wasn’t helpful and it didn’t identify for them anything they could effectively do to help alleviate the anguish the newborn seemed to be experiencing. Basically: colic doesn’t help me calm my kid down, so now what?

The Mayo Clinic describes colic as a phenomenon of excessive crying usually seen in the first 12 weeks and notes primly that “managing colic adds significant stress to caring for your newborn child.” Although fussing and crying is normal for a newborn, excessive crying is sometimes attributed to a variety of medical issues, most commonly, but not exclusively: digestive issues, overfeeding, food allergies/intolerances, and stress at home (think: mom’s stressed and the baby can feel it, and get anxious and stressed herself in response to the emotional tension.) Scientists are looking into biological reasons, including differences in gut bacteria in infants with colic, for a cause, but the phenomenon is widespread.

Colic occurs in up to 25 percent of babies up to 6 weeks of age, says Dr. Elizabeth Marks, a pediatrician and internist in Albany, New York, of research into the prevalence of those symptoms.

She explains that colic is a “diagnosis of exclusion,” with no test, per se, capable of identifying it, and a vague range of symptoms. “There are several definitions, but the most common one followed is the ‘rule of 3’s’ – three hours of crying more than three days per week for more than three weeks in an infant less than three months of age,” she explains.

Before a diagnosis of colic is given, clinicians will consider acid reflux, feeding problems, heart disease, infection, and constipation, she explains, trying to rule each of them out. “Often a detailed history and physical exam, specifically a history surrounding feeding and burping schedules, can rule many of these conditions, or at least make them significantly less likely. Also asking about when crying occurs and what helps to console the child can help to determine the cause.”

In 2011, The Atlantic stated that there was currently “over-diagnosis and over-medication of gastroesophageal reflux disease in young infants,” and was centered on the work of Eric Hassall, a pediatric gastroenterologist. Reporter Esther Entin relayed Hassall’s concern that in the case of unnecessary treatments, including acid-suppressing medications, the risks outweigh the benefits. This is not to say that it’s never acid reflux, because there are cases where that is actually the cause, but that doctors are now more frequently going through a long list of possibilities, and reconsidering the application of a colic diagnosis.

It is rare to throw up our hands and say, ‘Your kid is just going to cry for 3-4 months.’ No parent these days is going to accept that.

Nine years ago, Susana Saitta, a New Jersey mother, brought her 10-day-old baby in to the pediatrician’s office to discuss episodes of extended crying. Since the baby was bottle fed, the doctor explained that it could be acid reflux or colic, and then determined she had both. But the crying persisted to eight months of age, during which time Saitta continued to look for answers, and found herself completely worn out. At eight months of age, against her pediatrician’s advice, she switched her baby to soy milk, and the colicky crying episodes stopped.

“With a vast majority of children there is an actual cause and it is rare to throw up our hands and say, ‘Your kid is just going to cry for 3-4 months.’ No parent these days is going to accept that,” says Dr. Natasha Burgert, a pediatrician in Kansas City, Missouri, who has not used a colic diagnosis for 10 years.

Dr. Burgert explains that she looks into the entire family dynamic, with a long list of possible factors and treatments, inclusive of “probiotics, prevention of child abuse, reflux, overfeeding, pooping habits, milk protein intolerance — our list is longer than it ever was to go through.” She emphasizes that it is essential to give a parent an action plan to work with.

No matter what she tried, 'he would just scream.'

Dr. Burgert believes it’s never “just colic” and urges parents to get the pediatrician involved right away. “I once had an infant patient that was three weeks into a heart problem but was being treated as colic at home,” she recalls. “Don’t wait. Colic isn’t an emergency but see the pediatrician to get good advice.”

Lisa Marchese, an Austin, Texas, mom who had her son five years ago, says after the initial “sleeping all the time” newborn phase wore off, her son would no longer settle down to sleep on his own at night. She remembers it would start in the evening followed by endless nights of breastfeeding on demand. No matter what she tried, “he would just scream.” The only technique that worked was swaddling (per Harvey Karp’s “5 S’s” identified in baby bible The Happiest Baby On The Block) and walking around with him while reading or singing.

“My husband would carry my son around swaddled and read. In the first year of my son’s life, my husband read to him all of the Lord of the Rings, The Silmarillion, and almost all the Harry Potter books.”

Marchese says the “true” colic period was to three or four months of age, but that even after the so-called “fourth trimester” passed, sleep was difficult. “It would be an hour or two, easily, of crying and fussing... If one of us wasn’t walking around talking to him or singing he wouldn’t sleep, and that only worked for a few hours at most.” When he finally slept through the night at 6 months of age, “it was so unusual we weren’t sure if he was OK.”

As with the other women Romper spoke to, Marchese found this period extremely stressful.

You give a new mom four hours of consecutive sleep and she’s like a new person. Reaching out for help is really important.

The parents’ wellbeing needs to be considered, Dr. Burgert says. “It’s OK to step away from your baby and take a break if you need help and feel overwhelmed. You give a new mom four hours of consecutive sleep and she’s like a new person. Reaching out for help is really important.”

As a pediatrician, Dr. Burgert will often see a mother usually before the OB-GYN does, and is therefore sometimes a first screener for stress or postpartum depression. “A baby will pick up on a parent’s stress and anxiety and that can make the episodes of crying worse for everyone,” she says.

“Colic in an infant has been linked with a higher risk of postpartum depression in mothers,” says Dr. Marks, “so if mom is showing symptoms, which include severe moodiness, irritability, anxiety, sleep problems, fatigue, guilt or crying spells, she should speak with her doctor. Postpartum depression can be severe and debilitating, but is incredibly common and treatable when discussed early.”

And key to handling a baby who cries a lot is the knowledge that this is temporary, and straightforward advice on how to deal in the meantime. Dr. Burgert teaches patients about the “period of PURPLE crying,” and provides parents with ways to help a crying newborn through the fourth trimester while avoiding, at all costs, child abuse and most importantly, shaken baby syndrome.

Still, the pediatricians Romper spoke to emphasized that parents should not chalk up excessive crying to colic without seeking the advice of a physician. The family pediatrician can refer patients on to specialists like lactation consultants or gastroenterologists in cases where it is warranted.

“I would recommend a gastrointestinal specialists only if we are seeing weight loss, vomiting, bloody poop, or rarely for reflux,” says Dr. Burgert.

“There is typically no need for a patient to see a specialist for colic,” agrees Dr. Marks. “The only reason they would need to see a specialist is if another diagnosis was determined to be the cause of the crying that could not be managed by a primary care provider, such as a heart condition.”

Saitta, Marchese, and Pannell all know too well the long days and even longer nights of living with a colicky newborn. Although Saitta eventually realized on her own that her baby was lactose intolerant, Marchese and Pannell weren’t given any medical diagnoses they could work with. Both Pannell and Marchese ended up holding their infants for long hours as that was their most effective way to reduce the intense crying. Pannell used to joke that it would have been easier had her son “just stayed inside another few months until he was really ready to come out,” because holding him all the time was tiring. Each family did all they could to alleviate the colic while trying for many, many months with little relief, at great cost to the wellbeing of the parents.

The problem, it seemed, was the doctors didn’t hear their cries.