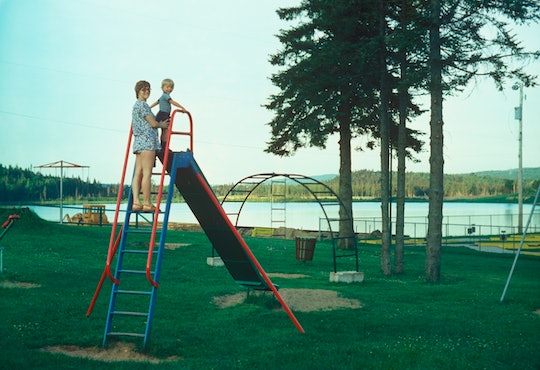 A mother standing at the top of a slide with her young son. Getty Images

When A Parent Yells At Their Child On The Playground, What Do You Do?

It was a typical day at the playground. A typical day for a New York City playground that is, where people of all different backgrounds come together — or don’t — children jumping from the fountain into the sandbox, vying for icees from the cart, and negotiating turns on the tire swings.

At this time of day, all the parents are tired, trying to navigate from playtime to bedtime in the most strategic way possible, while the kids get their last bout of energy out. We all know how we feel by 5 p.m.; it’s tense.

On this specific day, a mother of two girls began yelling at her kids, loudly. And then she started hitting them. A friend of mine, a man, intervened, and told her to stop or leave the playground. Her response was that they were her kids and he should mind his own business, especially as someone who hasn’t carried a child or experienced labor. People standing nearby called the police. The situation escalated, with many people crowded around, a few interjecting, and the mom clearly anxious and trying to get her kids home before the police came.

What is the right thing to do in these situations?

“There are a lot of factors involved,” says Michelle Gunnia, a licensed clinical psychologist with a doctorate in psychology, who spoke with Romper in an emailed conversation. “Are we sure that it was a mother and not a caregiver? What does it mean that the mom was being ‘abusive’ or even ‘yelling?’” Yelling may mean something totally different from one parent to another parent, she points out.

“Cultural factors could be involved as well,” says Gunnia. “Corporal punishment alone is not illegal, neither is yelling. Emotional maltreatment would involve yelling that has potential to cause serious mental disorders, a result of constant verbally abusive language to harshly criticize and denigrate a child.”

That is, emotional abuse is harder to pin down, while physical abuse — direct harm to a child — can warrant intervention. In Gunnia’s opinion, calling 911 is the right thing to do. If not, it’s a judgment call what to do instead.

Just because adults are powerful figures to children doesn't mean that all their behaviors are healthy.

The U.S. has little to no case law requiring a “duty to rescue,” so the decision to intervene is purely ethical. Helping the victim can have positive effects on young bystanders, but comes with risks to the person intervening and to the child, who may be punished later. “If you are going to intervene be as non-threatening, non-aggressive as possible. Ask if the family needs help calmly,” says Gunnia. “If you have any info on the family you could call 311 or make a report of potential child abuse [to Child Protective Services (CPS)], but some information will be necessary."

In 2018, the American Academy of Pediatrics took a firm stance against all forms of corporal punishment, even if not excessive or abusive, including spanking, yelling, shaming children, noting the potentially negative impact on children's behavioral, cognitive, psychosocial, and emotional functioning. Research has shown no long-term benefit from corporal punishment, but we also know there are many cultures where physical punishment is the norm.

I’ve seen many situations like this in Brooklyn, but very few where people intervene. Many people feel comfortable calling the police, but it is ultimately a matter for CPS. Outside of how we act, there’s also the fact that our child is right by our side, taking all of this in. How do we make sense of it for them?

“When explaining this to a child, it's important to highlight your own concern about the abuse in order to raise awareness that this behavior is not normal, while demonstrating healthy communication,” says Katharine Ernst, a licensed master social worker, by email.

“Witnessing something has the potential to be as traumatic as experiencing it oneself,” points out Lisa Lerner, a licensed clinical social worker, referring to what we term “secondary traumatic stress” or “vicarious trauma.”

“It could challenge the child’s basic assumptions about themselves, others and the world [such as] that the world is always a safe place and that parents always work to protect their children from harm,” Lerner tells Romper in emailed correspondence.

But helping your child contextualize the incident can reduce the risk of trauma. “[Ask] the child what they think and feel about what they saw. This helps the child immediately consolidate the information. The sooner it gets discussed the better the information gets consolidated in a non-traumatizing way," Lerner says.

Ernst suggests using moments like these to teach children about respect, personal space, and setting boundaries. “Just because adults are powerful figures to children doesn't mean that all their behaviors are healthy, and if they see someone getting harmed, they can bring it to a trustworthy adult,” she says. This can help bring trust between children and their caretakers, model healthy communication, and teach children about age-appropriate, relevant and concrete boundaries.

I remember an incident walking my 2-year-old to school a few years ago where we overheard a young man being verbally abusive and threatening to a young boy. I was physically and emotionally shaken, but took the opportunity to turn to my son and say, “Some people don’t have resources and really struggle, but we are doing OK and we wouldn't ever speak like that to you.” (To which my son responded, “Mom, do you see that dump truck! There’s a dump truck!!”)

When we witness an injustice or someone getting hurt, even a small act can [have] a significant impact.

It’s hard to know what matters, what actually sticks with our kids at the end of the day. Ernst suggests parents watch out for fixation on the event long after it happened, withdrawal from social activities, increased inability to trust others, avoidance of situations or places that remind them of the incident, nightmares, and problems focusing.

Anecdotally, I find it powerful when people intervene, and see value for the children involved in hearing people speak out, seeing people care.

“When we witness an injustice or someone getting hurt, even a small act can [have] a significant impact,” says Lerner. “In the case of that child, witnessing someone intervene, could have helped him/her learn that in a world that sometimes is dangerous, some people will work to protect her."

What’s more important than a child feeling safe and protected? We know many families aren’t able to provide security, but maybe that’s where we, as the community, can step up.

To speak with a Childhelp counselor, please call or text the Childhelp National Child Abuse Hotline at 1-800-4-A-CHILD (1-800-422-4453). You can also live chat with a trained counselor at www.childhelphotline.org.

More Like This
This Is What It’s Like To Parent With OCD Right Now
Tips For Apple Picking With Kids
Here’s Your Guide To Paced Bottle Feeding
Widows Are Expected To Mourn Forever — How Do I Date Again Without Shame?