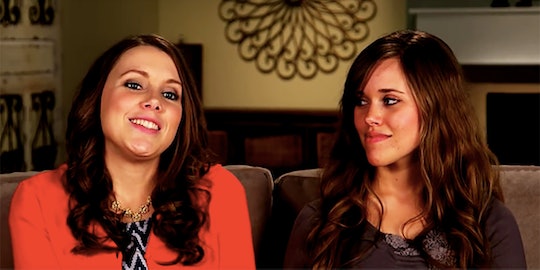 Here's When All The Duggar Women Are Due

Just when you think you've finally got all of the Duggar pregnancies figured out, another pregnancy announcement pops up. Not that this is a bad thing, of course, but it can be a bit confusing to keep track of everything. And if you can relate to this sentiment (I know I can) then it's possible you want a primer on when all of the Duggar women are due. Spoiler alert: Fall and winter are going to be busy, that's for sure!

In case you've lost count, there are currently five Duggar women who are pregnant: Kendra, Amy, Lauren, Anna, and Abbie. (Jessa and Ben Seewald already welcomed their baby girl, Ivy, in May.) It's worth mentioning, though, that there would have been six pregnant Duggars at this point. Unfortunately, however, Joy-Anna's second pregnancy ended in miscarriage. Joy-Anna and her husband, Austin Forsyth, announced the tragic news in July, explaining their baby girl had no heartbeat when they went in for the 20-week ultrasound. Joy-Anna would have been due this fall, likely in November, based on when the anatomy scan took place.

Now, let's take a look at the approximate due dates of the five Duggar women who are currently pregnant, shall we?

Although Amy isn't one of Michelle and Jim Bob's 19 children, she is Jim Bob's niece, so I'm definitely counting her as a Duggar. Amy and her husband, Dillon King, announced their baby news on April 21, Us Weekly reported. Since then, Amy has kept her Instagram followers updated throughout her pregnancy journey, even revealing the baby's birth month in her 20-week update. And the #OctoberBaby hashtag means Amy's due date is coming up quickly. Doing the math, Amy's possible due date is Oct. 9.

In April, Joseph and Kendra Duggar announced they're expecting their second child, Us Weekly reported. “We are ready to double the fun at our house!” Joe and Kendra told the publication. “Being parents has already proven to be a greater joy than we had hoped or imagined. We love getting to parent together and are loving every moment and milestone. We are very happy that our little family will welcome a new addition later this year. Children really are a blessing from God!”

In June, Joe and Kendra followed up this news with a sex reveal. “We are so excited to announce the gender of baby number #2 ….It’s a GIRL. We are so thrilled to welcome our sweet baby girl this November!” they wrote on Instagram. And there you have it — Kendra is due in November.

In May, Josiah and Lauren Duggar shared that they are expecting a baby this coming fall, People reported. The happy news came after the couple revealed Lauren had suffered a miscarriage in October 2018. "We are so excited to announce that baby #2 is on the the way!!!!" they wrote on Instagram. "It’s hard to fully express just how grateful we are for God blessing us again with another precious gift!"

Although Lauren and Josiah haven't shared a specific due date with their fans, they did share in June that they are expecting a baby girl. Based on the timing of the announcement, a due date in November seems likely.

In April, Anna Duggar revealed that she was pregnant with her and Josh's sixth child, People reported. "We are so excited to announce that we are expecting a new little one!" Anna wrote on Instagram. "As we watch our children grow and thrive — we look forward to baby six joining us this fall!"

Anna hasn't publicly shared her due date, but she did share the order of the Duggar sisters' due dates, according to Cheat Sheet. "Kendra, Joy, Lauren and I’m due last,” she wrote on Instagram in response to a follower's question (mind you, this was written before Joy-Anna suffered a miscarriage). With this in mind, I'd be willing to bet Anna's due date is sometime in mid-to-late November.

John David and Abbie are the most recently married of the Duggar clan. Considering the Duggars' tendency to start a family soon after tying the knot, fans probably weren't too surprised when, on Aug. 2, John and Abbie announced they're expecting their first child. If Abbie and John waited until 12 weeks to announce the pregnancy, that would put Abbie's due date sometime in February.

Although there's always the possibility that any of these babies could arrive a bit early or late, one thing is clear: The Duggar family has an exciting fall and winter to look forward to!