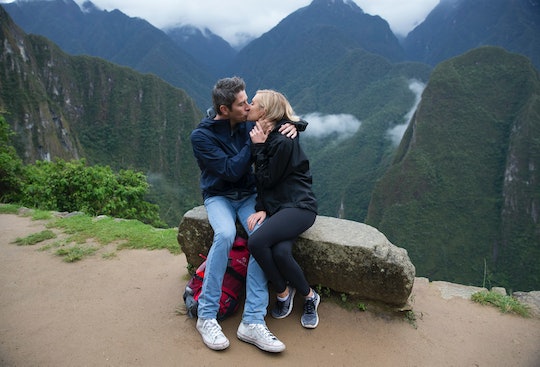 Here's When You Can Expect 'The Bachelor's Arie & Lauren B. To Tie The Knot

Arie Luyendyke Jr.'s season of The Bachelor was criticized as boring by many, all the way until the last episode in which Arie made the decision to dump his original pick, Becca, in favor of pursuing a relationship with his runner-up, Lauren. But on Tuesday night Arie actually proposed to Lauren B. So when are Arie and Lauren B. from The Bachelor getting married? The couple had an unconventional start, but that doesn't mean that they aren't headed toward a beautiful life together. After all, they've already overcome quite a bit to get to be together after all of this.

After an agonizing final few dates, Arie was clearly seriously struggling with whether to choose solid Becca, who his family agreed would be a better match for him, or Lauren, who he said he was inexplicably drawn to. He ended up proposing to Becca, only to break up with her on camera just a few weeks later, citing his continued love of Lauren as a reason. Arie then went to Lauren's hometown of Virginia Beach to win her back and the couple decided to start dating rather than jump immediately into an engagement. That is, until a few months later — as we all saw on Tuesday.

Arie proposed to Lauren on the After the Final Rose special, which was just a few months after he ended his engagement to Becca. (Let's just hope this one sticks.) Famously, this storyline most closely resembles former Bachelor Jason Mesnick, who proposed to Melissa at the end of his season, then broke up with her for his runner-up on the After the Final Rose special. Jason and Molly dated for a few months and then got married. That was almost 10 years ago. They're still together, have children, and seem honestly very happy. So it's possible that Lauren and Arie will get married and live happily ever after when all of this is over.

The Bachelor actually brought Jason on Arie's finale show to get his thoughts, along with Ben Higgins who became famous for telling two women on his show that he loved them. Jason didn't say 100 percent what he thought Arie should do, just that he should follow his heart and be himself. Which he clearly did, even if not in the most direct way.

When Arie and Lauren came out on the After the Final Rose special on Tuesday, they didn't exactly get the most receptive audience, as many people were still firmly on Team Becca. But it became very clear that Arie is serious about his relationship with Lauren when he got down on one knee and told her that he truly believed she was his soulmate. The couple have already made plans to take a vacation out of the country and for her to move with him to Arizona.

For what it's worth, Arie's original fiancée, Becca, has been incredibly gracious and classy throughout this whole ordeal. She handled the on-screen breakup beautifully, and since then she has been kind, even towards Arie and Lauren. In an interview with People she said, "If they want to make it work, then they will, and I hope they’re strong enough to get through it all," while explaining that though she faults Arie for the way he handled things, she can't blame Lauren for falling in love with him as well. "They’re going to be together and do their thing. I wanted to move on and have my person that I can focus on and live my life with," she said.

And that's probably as close to a blessing as this couple is likely to get from Becca. Arie and Lauren B. don't seem to have set an actual date for their wedding so far, but considering how determined Arie was to get back together with his former runner-up, it could be fairly soon. I mean, it's not like there was pressure for him to ask Lauren to marry him. The series had stopped filming, after all, so they could've just kept right on dating and left it at that. Things must be going well for it to be getting this serious.