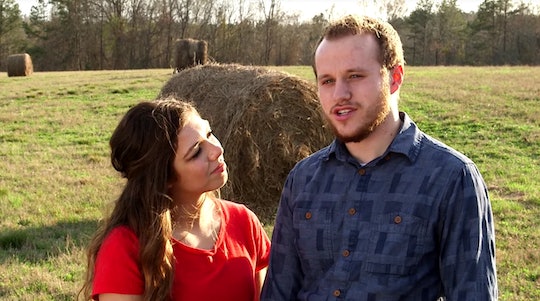 It's fun, if not a challenge, to try and keep up with the Duggar family. The many reality stars of TLC's Counting On always seem to have something going on in their lives, whether it be a pregnancy, an upcoming wedding, or a courtship. Duggar sibling, Josiah Duggar, is an example of just this — he and his fiancée Lauren Swanson are engaged to be married and fans could not be any more excited for the couple. But with their wedding on the horizon, you might be wondering when Josiah Duggar and Lauren Swanson will get married. There are a lot of theories out there as to when Swanson will finally join the ever-expanding Duggar family, but there's one huge hint on Duggar's own Instagram.

When you think about it, Duggar and Swanson haven't been engaged for that long, although it may seem like it's been a while. In March, Duggar and Swanson released a statement to Us Weekly confirming that they were, indeed, engaged after just three months of courting. "This is an exciting, big step in our lives, and the whole thing is very meaningful," Duggar told Us Weekly.

At the time of their engagement, the couple didn't reveal too many details about their wedding, other than the fact that it would require some planning since both of their families are so large. "It'll take a lot of planning since we have big families on both sides but we're very excited to get started and so thankful for how God has brought our lives together," Duggar told Us Weekly.

But now that it has been three months since then, fans want to know more and are certainly wondering when their wedding will be. As it turns out, there are a few theories out there. But the strongest one has to be that Duggar and Swanson will tie the knot on New Year's Eve this year, giving them plenty of time to plain their wedding.

You might have missed it, but Duggar actually put their wedding registry link to Bed Bath & Beyond in his Instagram bio recently, which states that they will be getting married on Dec. 31, 2018. But, here's the thing; it could easily be a fake to throw off fans or a tactic to help maintain their privacy, while still asking fans for gifts. If you're a big fan of the couple, you can buy Duggar and Swanson a butter dish to show them just how excited you are for their matrimony.

Still, it seems that fans are more convinced that Duggar and Swanson are getting married a lot sooner than at the end of the year. In fact, they're pretty much convinced that the couple is getting married, like, now according to In Touch Weekly. Over on Reddit, users are convinced that the couple, who they call SiRen (which comes from a combination of Lauren and Josiah's names) got married this weekend based on the fact that Swanson's sister, Hannah, was in Arkansas and posted a photo of the two of them with the caption "#littlesisgettingmarried." However, some fans were quick to point out that Hannah could have been in town for Swanson's bridal shower or bachelorette party.

Given that the couple only courted for three months, the theory about them getting married somewhat soon could be very true — especially since it has been three months since their engagement announcement. Not to mention, according to In Touch Weekly, Duggar already had his bachelor party a few days ago.

But, on the other hand, it's also totally possible that they didn't get married this weekend. Some Reddit users believe the couple is going to wait until after Duggar's pregnant siblings, Kendra Caldwell and Jinger Duggar, give birth to their babies this summer.

Whatever the case may be, it's only a matter of time before Duggar and Swanson tie the knot. And when they do get married, there are no doubts that will share their very exciting news with their very invested fans. Patience is a virtue.