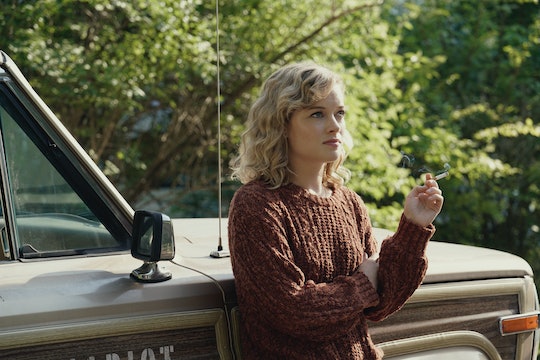 If there’s one major thing that sets Hulu apart from Netflix, it’s the fact that instead of releasing all episodes of a new series at once, Hulu takes a more traditional approach. I don't know which is the better method or if there really is a "better" one, but this means that when Castle Rock premieres on July 25, viewers aren't going to get all 10 episodes at the same time. Like any other Hulu show, Wednesdays are when new episodes of Castle Rock will be released for your streaming pleasure.

For those who prefer to sit unmoving on the couch and watch a season of a show straight without pause, this isn't the best news in the world. But it does mean that you’ll be able to process each new plot development in the week between new episodes. For me, the only thing that got me through waiting for a new episode of The Handmaid’s Tale each week was staying glued to Reddit and developing theories of my own. It wasn't easy, but I did it.

I do have some good news, however. Although Castle Rock will air new episodes every Wednesday, its premiere date will feature the first three episodes all at once. This isn't an uncommon practice for Hulu, but it will likely make the slow pace of a once weekly show easier to bear afterward.

The decision for new episodes of Castle Rock to be released one at a time following the premiere, wasn't made by producer J.J. Abrams or even creators Sam Shaw and Dustin Thomason. It’s par for the course with Hulu shows and, Shaw explained at Comic-Con, it might be necessary with a show like this.

"There are… horror movies and stories that are uncomfortable because you don’t know what to expect from them," he said, referring to the weekly release of the episodes as an "IV drip" meant to slowly unfold. "There’s something queasy-making and unsettling about entering into scenes and stories and not [being] exactly sure what to be afraid of or what you don’t need to be afraid of. And that’s what Stephen King does."

Bill Skarsgård, who plays a mysterious man found in the basement of Shawshank State Penitentiary (and the current Pennywise from the It remake of 2017), spoke to SyFy at Comic-Con about what to expect from the show’s first season. And even though there’s going to be a week-long gap between new episodes, it sounds like it might all be worth it in the end. Even if most of us have gotten spoiled by Netflix’s practices.

"All I'm allowed to say is that I'm a prisoner at Shawshank and even that doesn't even begin to describe anything really," he said. "I mean, the fact is that the show and the characters [are] much weirder than that."

Castle Rock co-creator Shaw also put emphasis on the presence of the famous Stephen King prison in the show. "Shawshank is a really crucial part of this first season. There's a sort of disturbing mystery that plays out that involves Shawshank," he revealed. "So I hope that’ll be exciting for fans. I can tell you that for us as writers who are sort of like Stephen King super fans ourselves, the fact that we can sit down in the morning and write 'interior Shawshank Prison: Day' on our computers is pretty amazing."

As with other Hulu shows, Castle Rock will be a weekly show, but I imagine there will be enough suspense and mystery to keep viewers coming back for more every Wednesday.