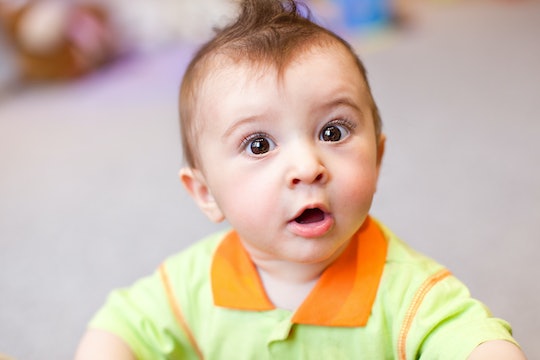 Your Baby's Hiccups May Actually Be Helping Them Learn, According To New Study

While getting the hiccups as an adult can sometimes be uncomfortable, babies tend to appear much less distressed by them — even if their parents become more and more anxious with each spontaneous hic they let out. But a new study published in Clinical Neurophysiology shows that hiccups may actually serve and important function for infants. In fact, researchers from University College London say that hiccups may help babies learn how to monitor and regulate their breathing by triggering brain signals.

While researchers and medical professionals know how a hiccup happens (it begins with an involuntary contraction of the diaphragm that leads the epiglottis to snap shut, causing a hiccup's tell-tale "hic" sound, according to the Mayo Clinic), it's not been altogether clear why they happen in the first place. Until now, that is.

For their study, University College London researchers recorded the brain activity of 13 newborn infants ranging from pre-term and full-term using electroencephalography (EEG) electrodes placed on their scalps. To monitor for when babies were hiccuping, movement sensors were placed on the infants' torsos. They found that hiccups in infants triggered three brainwaves, the third of which might be helping the infant learn to regulate breathing and control muscles related to breathing, such as the diaphragm.

"The activity resulting from a hiccup may be helping the baby's brain to learn how to monitor the breathing muscles so that eventually breathing can be voluntary controlled by moving the diaphragm up and down," Dr Lorenzo Fabrizi, a senior research fellow at University College London one of the study's lead authors, said in a statement provided by the college. "When we are born, the circuits which process body sensations are not fully developed, so the establishment of such networks is a crucial developmental milestone for newborns."

Of course, although hiccups are more prevalent in infants, they continue long past infancy, occurring at ages where breathing regulation and muscle control have long since been mastered. So what's the deal with hiccups in adults? Researchers behind the study published Clinical Neurophysiology told CNN hiccups haven't been found to have any "known advantages" for adults, and may simply be a "hangover" function that sticks with us past the period in which it is useful.

"The reasons for why we hiccup are not entirely clear, but there may be a developmental reason, given that fetuses and newborn babies hiccup so frequently," research associate Kimberley Whitehead, one of the study's lead authors, said in a statement. "Our findings have prompted us to wonder whether hiccups in adults, which appear to be mainly a nuisance, may in fact by a vestigial reflex, left over from infancy when it had an important function."

While there's likely still more to learn about hiccups, this latest study may ease the minds of some parents by letting them know that it's probably OK, potentially even beneficial, to let an infant's hiccups continue.