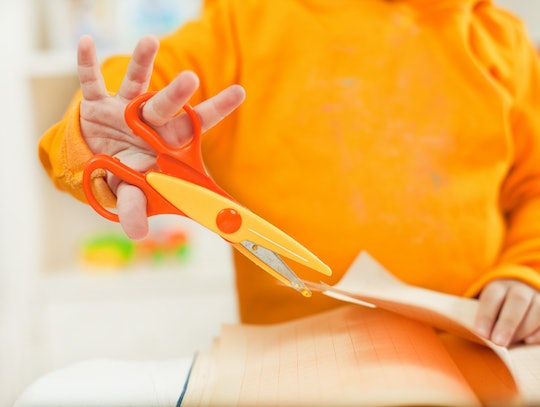 Here's When Your Child Can Start Using Scissors

Often times, when worrying about your child's safety, your mind focusses on the big concerns. Covering outlets, buying (and installing) the best car seat, keeping their sleep space free from dangers — you know, the big stuff. But what about smaller safety concerns, like those that come up during arts and crafts. Obviously this won't be on your mind during the first year or two of your child's life, but it will come up when they hit toddlerhood. And when that happens, you may wonder when can a toddler use scissors to create works of art.

If your kid is interested in using scissors there's not much harm in letting them give it a shot, as long as you do it safely. Although there's a bit of a suggested age range for scissor cutting, Parenting said that your child can start using scissors between the ages of 2 and one-half and 3. The site further noted that it's important to first give your toddler kid-sized, blunt-tip scissors that open and close easily to prevent any harm.

It's also important to get the right scissors for them, depending on if they're left-handed or right-handed. And with tons of scissor options, you should be wary of which pair you buy. According to Parents, the upper blades on left-handed scissors are on the left side so that your toddler can see the cutting line. And though you may think you can buy a pair of ambidextrous scissors and call it a day, Parents noted that the upper blade will still be on the right side even on ambidextrous scissors, which makes it difficult for your left-handed kid.

Learning to use scissors is also more than just an art skill, the newfound achievement can help with your toddler's overall mobility. According to Baby Center, learning to cut with scissors promotes fine motor development as your toddler exercises the muscles in their hands and hones their hand-eye coordination. With that said, remember to remind your kid what scissors are for, and what they're not for — like their hair.

With the right tools and enough confidence in your toddler, it is time to teach them how to use scissors. It won't be long until they start using their chops to make some amazing crafts just for you, especially right in time for Mother's Day.