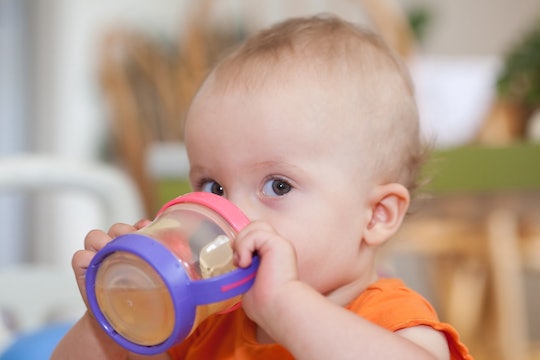 On super hot days when your baby is stripped down to nothing but a diaper and still can't stop sweating, you might be tempted to offer her a bottle or sippy cup of cold, refreshing water (even if she's exclusively breastfed and doesn't even drink from bottles or cups). I mean, it's not like you could get through the day without constant access to hydration, preferably iced. But babies have very different bodies, of course, with different needs. So when can babies drink water? Because as much as you've been trained to think that everybody needs eight ounces of H2O per day, infants operate according to a different set of rules.

As an adult, lukewarm milk is probably the last thing you'd reach for if you were feeling thirsty. But as pediatrician Stephen R. Daniels, M.D., told BabyCenter, "In general, your baby shouldn’t drink water until he's about six months old. Until then, he gets all the hydration he needs from breast milk or formula, even in hot weather."

When a baby younger than six months old has too much water, his body's ability to absorb nutrients can be compromised, as Dr. Alan Greene explained to The New York Times.

"Even though water may be the safest and healthiest everyday beverage for older children and adults, water can be dangerous for young babies," according to Dr. Greene.

There's enough water in breast milk or formula for healthy babies to thrive, Dr. Greene continued, and upsetting the balance could have serious consequences:

"Too much water can cause water intoxication in babies," he warned. And that's not good at all: Water intoxication is a condition in which sodium levels drop drastically, causing everything from irritability to brain swelling to unresponsiveness and seizures. Yikes!

No matter how thirsty you think your baby looks, giving her a bottle of water certainly doesn't seem worth risks like seizures and brain swelling. And remember, you only have to wait until the six month mark. It's worth noting that "even after six months of age, babies do not need much water, but introducing some in a bottle or sippy cup can help them get used to the taste (or lack thereof) and consistency of the liquid," pediatrician Dr. Jennifer Shu of Children's Medical Group told CNN. As babies transition into eating solid foods, experts typically recommend limiting their water intake to about two to four ounces per day (or six to eight ounces in cases of constipation or extremely hot and humid weather).

Babies should drink at least 50 percent more than usual in the summer, according to an article in Parents, so feel free to give them extra formula and/or breast milk. And try to find other ways to help them cool down in the heat: Dress them in loose, breathable clothing, seek out shade whenever possible, and avoid the playground during the hours of the day when the sun is at its strongest (10 a.m. to 2 p.m.). When my first was a baby, I carried one of those little Evian misting bottles around in my diaper bag all summer long so I could whip one out and give her a nice little spritz whenever she started to get that sweaty, flushed cheeks kind of look.

When the time does come to start giving your baby water, do yourself a favor and stick to actual water, not juice or even juice diluted with water. Juice once in awhile is fine, of course, but let her develop a taste for plain water first. You'll be doing her a favor, too: That's the kind of healthy preference that's going to last a lifetime.