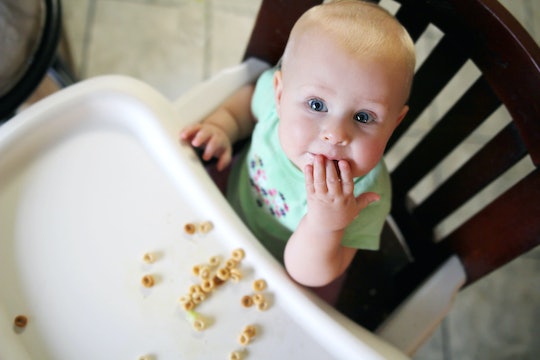 Cheerios are a baby rite of passage. I have photos of both my kids sitting in their high chairs working on their first tray full of the popular cereal. It's one of the most adorable baby tricks, figuring out how to get those little pieces of cereal into their mouths with those chubby little fingers. However, it can be tricky to figure out when they're ready for this milestone, because Cheerios are technically hard, but also dissolve relatively quickly once they make it into your mouth. So how do you know when when your baby is ready for Cheerios?

Babies can eat Cheerios when they have mastered the pincer grasp, can chew, and have the ability to sit without support, according to the Cheerios website. One fear that many parents have is whether their baby can actually choke on a Cheerio or small solid food if it is introduced too early. Your Kids Table, a site written by Alisha Grogan, a pediatric occupational therapist (OT), said that Cheerios aren't the first food she recommends when a baby is ready to start solid food because they don't actually dissolve very quickly without a little chewing first. She explained her advice as a pediatric OT, "Long before they have Cheerios, I want to make sure babies can eat foods that dissolve quickly like graham crackers and puffs." She said that while occasional gagging on solid food is normal, persistent gagging that gets in the way of your baby being able to eat is an indicator that they aren’t ready to eat Cheerios yet."

So at what age can you expect to start introducing the cereal to your infant? Some babies might have mastered the pincer grasp and sitting up without support by 9 months, according to Parenting, and are therefore ready to try Cheerios. The site explained that babies use a "crude pincer grasp between 7 and 8 months, and begin to use a true pincer around 9 months. "A few months later, they refine the skill and, with either hand, very neatly take their thumb and forefinger to pick up one Cheerio or one piece of a puzzle." However, it's important to remember that all babies develop on their own timelines, so don't worry if your baby isn't quite ready to crunch-and-dissolve some whole grain cereal within this timeframe.

Once your baby seems ready to try finger foods Cheerios, there are other options you can introduce as well: Working Mother recommended trying pasta noodles, other dry cereal, well cooked veggies like peas or carrots, bananas, or small pieces of soft bread. But the site did reiterate that babies should be able to sit up on their own reliably before introducing finger foods, "Before you should even think about introducing Cheerios and other finger foods to your baby, she must be able to sit up on her own for long periods of time as well as hold her own head up without support." That means if you have to put your baby in a Bumbo or similar seat to eat to keep them upright, she might not be ready for finger foods.

If you're eyeing the Cheerio box and wondering when you can crack it open for your baby, make sure she's hitting these milestones well on her own before you offer a selection of whole grain treats.