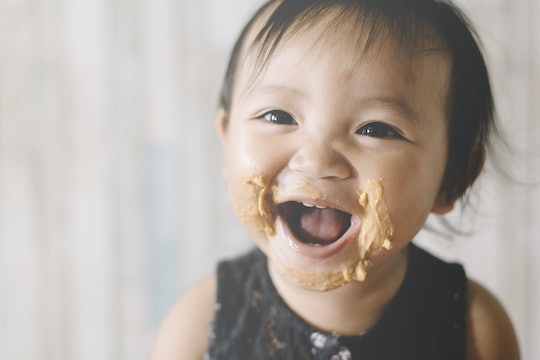 When I had my son, the rules around peanut butter were fierce. The common practice at the time seemed to say, "Block off any area wherein peanuts may live, exist, grow, or have once visited, and avoid those locations until your child is at least 2." Thankfully times have changed, and we're introducing peanut products with all the other foods. However, peanut butter itself is something else entirely, and this sticky substance is a known choking hazard. So it begs the question: when can babies have peanut butter? Because, let's be honest, there are few foods easier to prepare than a PB&J.

As it turns out, peanut butter is often listed as one of the most dangerous choking hazards by the American Academy of Pediatrics (AAP). It's due to the fact that it's so sticky and so thick that it's hard to swallow properly and can get lodged in the throat, blocking the airway. The same goes for whole peanuts, which are apparently the perfect size and shape to accidentally inhale while eating. The AAP suggested that parents thin out peanut butter with a liquid, or introduce it in a puff form in the beginning when your baby is first trying out solids. When introducing full-on, thick peanut butter, it's best to wait until they are more adept at eating, depending upon the individual child. The AAP noted, however, that chunks of peanut butter and whole peanuts shouldn't be given to children under the age of 4.

Thankfully, science is no longer worried about the early introduction of peanut butter causing allergies, wiping one big risk of peanut butter out of our minds. Because, according to the National Institute of Allergy and Infectious Diseases (NIAID), science has now found that early introduction (as in first foods early) actually encourages allergies not to develop. Doesn't make that gag reflex any better, though.

For my son, the idea of introducing peanut butter was even more fraught than it usually is. He has autism and sensory issues that have contributed to his having lower muscle tone and ultra-sensitive gagging reflexes that were somewhat unpredictable. One day he'd be able to eat sushi and chow down on burgers and sausage, and the next he'd gag when eating a banana or applesauce. We had to watch him closely when he ate all of the time, because we never knew when it was going to happen. We also didn't know when he was making himself sick and when he was choking because it was so unpredictable.

While this is not the case for most parents, the nervousness I experienced every time I would introduce a new food is universal. Peanut butter was one of my biggest worries, to be honest. Thankfully, peanut butter on toast turned out to be one of his favorite foods, which meant he focused and concentrated on the food while he ate it, and was less likely to gag. But what about neurotypical toddlers? When can toddlers have peanut butter safely?

The AAP's recommendation seems pretty harsh, but I spoke with my son's speech pathologist and feeding therapist, Alex Kendrick, and she tells Romper that it actually makes a lot of sense. "Chunks of peanut butter or peanut butter on soft bread can form a ball of food that can stick itself in your baby's throat." She suggests that once your child is an adept eater who can chew and swallow foods easily that you consider small amounts of peanut butter on crispy foods. "Spreading a thin layer of peanut butter, preferably the thin stuff you have to stir, over a cracker, a piece of toast, or on a wafer, is probably the safest way to get your kid used to the strange mouth feel of it."

Kendrick also notes that your child should never be given whole peanuts or crunchy peanut butter because there can be larger bits of the nut in that preparation which can be dangerous. But as for that time-honored tradition of PB&J on wheat? You'll either want to majorly thin out the spread and make the bread a bit crispier, or you'll want to wait until your kid can actually chew. A pain in the butt for sure, but safety is paramount. At least it's safe just in time for pre-K, making all that lunch packing easier.