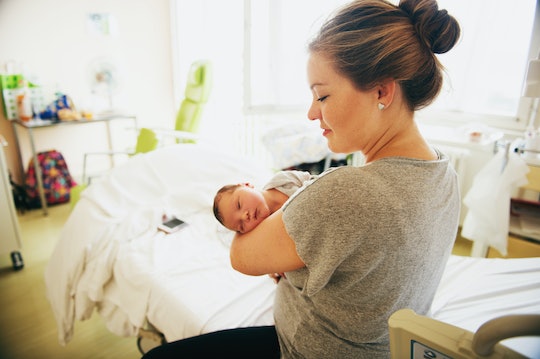 Here's When You Can Start Birth Control After Having A Baby, According To Experts

As a mother, I can tell you from personal experience that having a baby makes you realize a lot of things about yourself. For example, it didn't take long to learn how little sleep I truly needed to survive, how strong and brave I really am, and how eager I was to have another baby. Spoiler alert: I wasn't eager at all. So if you're postpartum and asking yourself, either silently or out loud, "When can I start birth control after having a baby? please know that you're not alone. Actually being in the throes of parenthood makes the prospect of future children nothing short of daunting, so it's best to learn how to prevent pregnancy until you're ready for round two.

First and foremost, according to BabyCenter it is unsafe to have sex involving penetration until at least two weeks after childbirth. "During this time, you're usually still bleeding and at risk for for a hemorrhage or uterine infection," reported the site. The Canadian Medical Association Journal confirms BabyCenter's report, also writing that sex right after birth can be potentially dangerous. "In theory, early intercourse could result in disruption of sutures, infection, dehiscence, bleeding and hematoma, or fistula formation."

According to Parents Magazine, most mothers are told, by their doctors, to avoid postpartum sex until six weeks after delivery, when they've had their postpartum checkup. Parents Magazine explained further, reporting the following:

"You'll want to make sure that you've had a chance to heal, and that the lochia (discharge of leftover blood and uterine tissue) has stopped."

And of course, as Parents Magazine reported, if you experienced an episiotomy, laceration, or other birth-related injury, it may take longer to heal and, as a result, longer before you're ready for post-birth intercourse.

According to Parents Magazine, your hormones won't return to normal until after you begin menstruating, which is generally around 12 weeks postpartum. However, that doesn't mean you shouldn't be on birth control prior to having postpartum sex. According to Planned Parenthood, relying on a delayed menstrual cycle, or breastfeeding, which can postpone the return of your period, isn't the most effective method of birth control. Yes, breastfeeding consistently can naturally stop your body from ovulating — and an estimated 2 out of 100 people who use breastfeeding as birth control get pregnant in the six months it can be used after a baby is born, according to Planned Parenthood — but a mother can't use formula, can't substitute a breastfeeding session for breast pumping, and must be consistent with feeding times in order for this particular method to be affective. You'll need to feed your baby every four hours during the day and every six hours during the night.

If you're breastfeeding and are interested in a hormonal form of birth control, you will need to choose carefully. According to KellyMom, birth control pills have been found to decrease milk supply. The site goes on to report that "progestin-only contraceptives are the preferred choice for breastfeeding mothers when something hormonal is desired or necessary."

While there are more than a few birth control options made available to new moms, it's advised, and perhaps best, to discuss those options with your health care provider at your fist postpartum visit. Whether or not you've healed, are emotionally, physically, and mentally ready for sex, are breastfeeding or formula-feeding, and are experiencing any other post-birth complications are all factors that need to be considered before you pick a birth control option and, well, enjoy yourself.